Once More On Pistol Braces

As noted Christmas week (see: A Brief Respite On Pistol Braces), the ATF suddenly backed off of their proposed rule change that would have treated AR pistols as "short barreled rifles". Many gun rights advocates cheered this abrupt reversal and a lot of people dwelling in fantasy land clamored that now we had 'em on the ropes and it was time to repeal the NFA!
Not so fast my friends.
Early afternoon on New Year's Eve, I got this email from our friends at the Bureau: 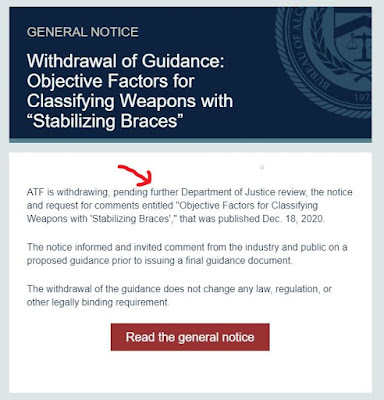 The key phrase here "pending further Department of Justice review".
I suggested in the linked post above that it all seemed a little too easy. To quote Princess Leia: They let us go. It was the only reason for the ease of our escape.
In that post I wrote:
They ATF quit on this awfully easily. That makes me suspect the whole thing was a trial run and that once Biden is in office, he will issue an executive order of some sort and armed with that order the ATF will go back and try this same scheme over but for real this time.
Pending further DOJ review means they aren't done on this issue, not by a long shot. With Trump sort of still in office, doing who the hell knows what, and Republican Congressmen getting loud about the issue, the ATF chose to bide their time but they are not going to give up. With a new administration just weeks away, I would be surprised if we don't see a new effort by the ATF to outlaw pistol braces and/or frighten gun owners into voluntarily registering their pistol ARs. Once they get the pistol ARs registered, it will be an easy task to get all ARs registered and, sticking with the Star Wars theme:

Darth ATF will be free to run amok.
This is not over but for now you can still get AR/Ak pistols. Oh, and most of us just got a big chunk of money from the same gubmint. You can put those two seemingly unrelated facts together and figure out for yourself what you should be doing with that "stimulus" money.
Posted by Arthur Sido at 7:30 PM