Four days to inauguration day so look around at your <important> stuff. Your firearms, your mags, your ammo.
Whatcha see is whatcha got and likely from here on out all you are going to have.
Between the gun control legislation already in the pipeline and Biden executive orders plus the inevitable, already planned and in place false flag shooting that is incoming and you have a recipe for the doors slamming shut in a hurry.
While I am not privy to the conversations, you can bet that at places like Palmetto State Armory and other manufacturers who primarily make AR/AK platform rifles and pistols, they are having pretty grim discussions about business planning for 2021 when their product line is banned. There are about to be thousands of Americans who are out of work thanks to Democrats and also thanks to Republicans for aiding and abetting the replacement of the American people.
Ammo continues to go up in price and down in availability. My favorite manufacturer, Fenix Ammunition out of Novi, Michigan, posted this yesterday:

They are not a huge manufacturer by any definition but they can't get the components and when they do and are able to make some ammo, it is gone in 15 minutes. You should sign up for their in-stock emails and be ready to buy when it comes.
Guns? Yeah they are a'sellin'. Speaking from personal experience, everything is flying out the door, even some of the weird items. Gun sales in the first month of 2021 seem to be keeping pace with the torrid and record setting pace of 2020: As Biden Prepares To Wage War On NRA, Gun Sales Erupt
People claiming that Biden's gun control rhetoric was just for show....well those people are fucking stupid. Biden just days ago claimed he was going to "defeat the NRA", so it doesn't sound like he was kidding. 2020 was crazy with almost 40 million background checks run by gun stores: 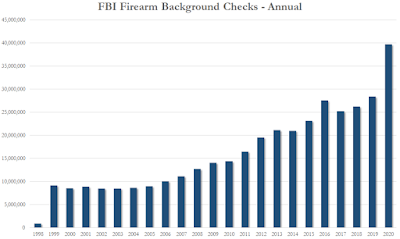 If manufacturers are run out of business, then available inventory, such as it is, will dry up pretty quickly.
Meanwhile the ATF has scheduled a video conference for FFL holders for February 4th... 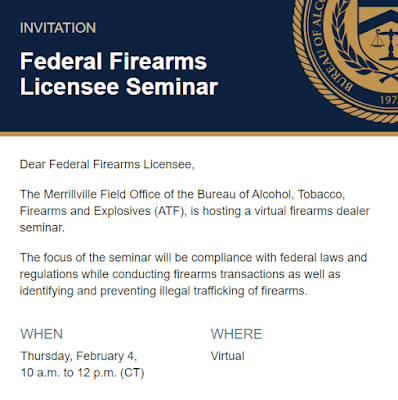 Conveniently, that is just about two weeks after Biden takes office. I am expecting they might have some new regulations for us to talk about.
We are at the brink of Armageddon for the 2nd Amendment.
So whatcha got? You better hope it is enough and you can't say you weren't warned.
Posted by Arthur Sido at 1:21 PM