Information Is Not Knowledge; Or Why People Are So Freaking Stupid Today

Arthur Sido January 16, 2021 2 Comments
A running gag my wife and I have is that while we are talking, one of us will say something like “I wonder if so-and-so is still alive” and the other person will say something like “If only we had a device that can access all of human knowledge with the click of a button!”. Usually when we say this, one of us is in front of a computer so….well, if I have to explain it, it is less amusing.
Younger people who have grown up with the internet don’t really notice it but the world has changed when it comes to information. It turns out that Nobel Prize winning “economist” and former Enron adviser Paul Krugman might have been a little off in 1998 when he dismissed the internet as a passing fad. 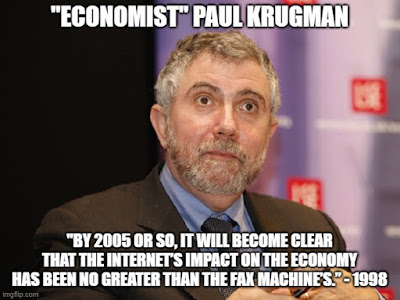 He knows about as much when it comes to the utility of the internet as he does about economics, where he is a nearly perfect contra-indicator: everything he predicts invariably is completely wrong. Granted the fax machine was a pretty significant achievement when prior to that documents had to be mailed, overnighted or couriered but fax machines do one thing and one thing only, while the internet has fundamentally changed how we do business.
Anyway, if you want to see images of the Dead Sea Scrolls or watch a TV commercial from the 1970s or listen to a piece of music from any era or talk to a relative who lives overseas, you can do it from your desk. I can’t really think of many things that are not on the internet. It is hard to really state this powerfully enough but how about this:
A middle school kid in Nebraska has access to 10,000 times more information sitting in his bedroom than any scholar who ever lived anywhere at any time in human history prior to the 1990s.
If anything that is a gross understatement. Consider this. The Great Library Of Alexandria was thought to hold between 40,000 and 400,000 papyrus scrolls. How many books can you buy on Kindle from Amazon right now and have downloaded instantly to your device?
Best estimates are anywhere from 6 million to 8 million, with an additional one million e-books added each year.
From trashy pulp novels to the greatest works of literature, it is all available with no effort at all.
I don’t need to belabor the point. The total accumulated knowledge of humanity through the ages is available to almost anyone in the world while they are on the toilet.
That is one side of the equation. Here is the other side:
People have never been dumber in my lifetime than they are right now.
I am talking about pants-on-head, dumber than a bag of hammers stupid. Talk to average people and it is stunning how stupid they are. Not necessarily unintelligent, although there is plenty of that, but just ignorant and foolish.
Not just huckleberries living out in the sticks but also people who live in the most cosmopolitan urban areas, people who have 17 or more years of formal “education” at what were once the finest schools on the planet. Education was once a solid indicator of intelligence but now having an extensive education generally means a willingness to sit through bullshit because you can’t figure out anything else to do with yourself. 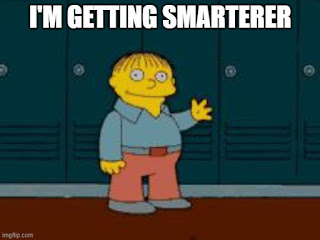 What is causing this disconnect? Why are people so dumb today when they should be the smartest people to have ever lived?
Obviously a major culprit and one easy to identify because it is so ubiquitous is the school system. I am not going to rehash all the problem in the public education system for the umpteen millionth time but suffice it to say that with few exceptions the education system in America is designed for the lowest common denominator, strives for conformity and actively squashes critical thinking. It is perfect to cranking out cubicle meerkats who peck at computer keyboards performing meaningless, repetitive tasks all day. Independent and creative thinkers? Those are unwanted and dangerous in our school system and business world. 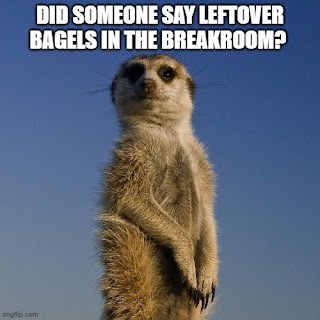 That is a huge part of the problem. Another is dysgenic breeding. We have always had losers, imbeciles, people prone to violence and indolence. In prior eras those people didn’t get laid because women didn’t want to raise their idiot children and when they did breed, they tended to die off quickly. Today it seems like the dumber, lazier and more violent you are, the more tail you get. These are the guys with flat bill baseball caps and neck tats staring at their phone in the passenger seat while their obese girlfriend pumps gas. This is known widely, or at least by me, as the Idiocracy Effect. Intelligence is a heritable physical trait and dumb people having lots of kids while smart people are not having any children means in the long term your population is getting dumber.
Those are obvious because we can see it all around us. How many of us have never met a young woman who seems like a decent girl who keeps getting knocked up by losers who never stick around? Or how many of us have never met a college grad who is dumb as a stump but always bragging about their edumuhcayshun?
A major factor that we tend to miss, perhaps the most critical of them all is this:
Knowledge and information are not the same thing.
You can get smarter after you get out of school if you pursue knowledge. I majored in political science and minored in history in college but I learned way more about both once I got out of college and started to pursue knowledge on my own. Yet as I look back and do some critical self-examination now, it seems to me that my increase of knowledge really started to plateau about the time the internet became more ubiquitous. So here is another Big Think:
Knowledge requires effort and an active pursuit to acquire.
Just knowing facts is not the same thing as knowledge. I know that might seem to be quibbling but it is true. In college I could memorize specific facts, regurgitate them on command for a test and then promptly forget those facts. That was information, and information can often be transitory. This is especially true now that information is so readily available. Why would I take the time to really learn something when I can just look it up online later? A personal anecdote, when I was into theology, early on I read the Bible a ton and knew where things were chapter and verse but as the internet and Bible apps grew more prevalent I began to forget because I could always just look it up again. There are plenty of other examples I am sure I could mention and you probably could as well.
For quick facts like “who is that actor and what other movies have I seen him in?” that is fine but when you forget how to pursue knowledge, information becomes cheap.
It is an old rule of thumb that something you obtain without effort has very little value and the opposite is also true.
The third generation of wealth is usually where things go sideways because they never had to work for that wealth and didn’t see their father work for it either. Most parents understand this. If you give your kid $20 at random, odds are they will just blow it on something stupid. Make them work hard and sweat for it, and it becomes a lot more precious to them.
Knowledge is precious precisely because it takes effort to attain it. Information is cheap because it doesn’t.
We are a nation full of people who have access to all the information imaginable and who treat that information as meaningless because it is just handed to them. They don’t really learn or pursue knowledge, they simply act as a conduit for information. Information flows through them and never sticks because they never had to work for it and they assume they can always go back and look it up again but what happens if that limitless flow of information suddenly stops? If you never learned how to work on a car because you can just watch a Youtube video to show you step by step how to fix something, what are you going to do without the internet?
One of the foundations of Western civilization is the pursuit of knowledge. It is little wonder that Western civilization is crumbling under the weight of people groups that have never been all that interested in that pursuit of knowledge. If you have not done the hard work of pursuing knowledge, you will soon lose the ability to innovate, repair and replace what is already in place. Look around you and imagine what life will be like in 20 years as more and more imbeciles are relying on a shrinking pool of innovators to keep the lights on. It should frighten the beejeezus out of you.
One of the great ironies of the 2020s will be the West sliding into a new Dark Ages while the people have access to limitless information.