Political flyers and stickers have always been a common sight on college campuses. Telephone poles, the back of street signs, anywhere there was a flat surface would contain flyers inviting people to come to group meetings or pushing some political agenda, all competing for space with flyers advertising deals on pizza or announcing a gig for some crappy campus band. It is just part of the campus environment.
Not in 2021.
Our local Democrat propaganda organ news station WANE 15 published a breathless story about a HATE CRIME that occurred on the campus of Purdue-Fort Wayne (PFW). The "hate crime" in question? A couple of stickers from Patriot Front.
PFW condemns hate flyers on campus
Purdue University Fort Wayne released a statement condemning the hate flyers and stickers found on its property Saturday morning.
The university says the flyers and stickers posted were “clearly meant to threaten and intimidate members of our very diverse community.” PFW says it has no tolerance for this behavior, which it called “unacceptable.”
---
PFW says “maintaining a civil, welcoming, and inclusive campus environment is central to Purdue University Fort Wayne’s mission. Diversity, equity, and inclusion are core values of our institution.”
The university says it fully endorses and supports anyone on campus who chooses to speak out against any form of hate.
According to its statement, PFW is in the process of removing the remaining materials and investigating where they originated from.
So you can speak out against "hate" but you can't speak out in favor of any political viewpoint to the right of Mao. Gotcha.
What were these "hate flyers and stickers". Did they use the Unholy Word Of Power "nigger"? Well let's take a look: 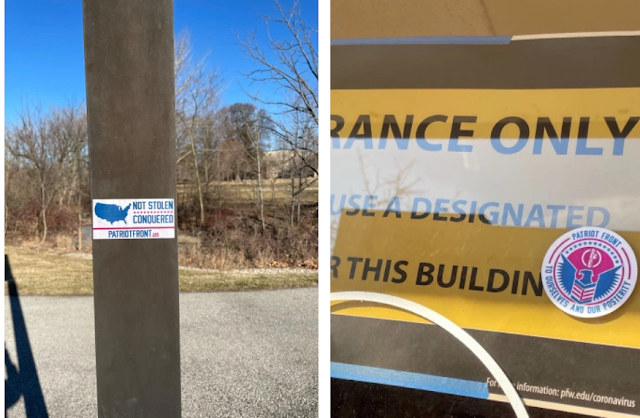 One sticker says "Not stolen, conquered" which is completely true. Once the colonies were established as a sort of beachhead for the English colonists, the White settlers began a 250 year process of moving westward, defeating Indian tribe after tribe until the continent was mostly pacified and unified under the banner of the United States. The Indians were conquered militarily and forced onto reservations. It is hard to argue with the fact that what happened was a conquest. Sure, "stolen" is a popular buzzword with the Left but what we call the United States has come to be in the same way virtually every other nation on earth has come into being, via conquest and warfare. The borders of the European continent are based on the aftermath of the wars of the 20th century. The same is true with most of Asia. African national boundaries are the result of the former colonial powers who conquered Africa, just the same as with South America. Mestizos in South America didn't form nation-states, they live in nation-states ordered by European conquerors. So at worst the first sticker is a reminder of what is to some people an uncomfortable truth.
The second sticker? It reads "To ourselves and our posterity". Those words are unfamiliar to most people, including the people commenting on WANE's Facebook page, but they are quite familiar to those of us who have more than a cursory familiarity with American history.
We the People of the United States, in Order to form a more perfect Union, establish Justice, insure domestic Tranquility, provide for the common defence, promote the general Welfare, and secure the Blessings of Liberty to ourselves and our Posterity, do ordain and establish this Constitution for the United States of America.
Those words form the preamble to the United States Constitution. A sticker that contains words that are found at the beginning of our governing document are now "hate stickers". That someone considers that to be "hate" speaks far more about them than it does about the people who put up the stickers.
Sure if you are somewhat observant you might notice that their logo contains something noteworthy: 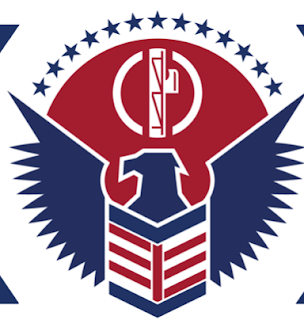 The symbol in white over the head of the eagle is a fasces, which is literally a bundle of sticks, but also is the root of the term fascism. The point being that sticks bundled together are much stronger than individual sticks, a pretty common and accurate statement. The idea of unity, whether nationalistic like Italian fascism or nationalism combined with ethnocentrism in German National Socialism, is a powerful foundation for that political movement. I am 100% sure that almost no one who sees those stickers would recognize the fasces or what it represents.
No, simply the word "patriot" is sufficient along with the average social media user being told "this is hateful" to create an image in their mind of the typical low information citizen that this is Bad Talk.
The stickers will be removed, people will recover on their fainting couches and all will move on but what is hilarious is that these stickers would have only been seen by a couple of people but now thanks to WANE they have been seen by many of the 189,840 people who follow their page. I wonder how many people will go to their website just out of curiosity? If you are interested in learning more for yourself, you can check out their website directly or go to their Gab page or their Bitchute channel.
Whether you agree with their positions, in whole or in part, it is a sad commentary on America that these stickers have the authorities in a tizzy but similar flyers and stickers from black Lives Matter or antifa, overtly Marxist groups, are not only permitted but praised.
No dissenting views are going to allowed going forward, just the globo-homo approved corporate talking points. So much for diversity being our greatest strength. 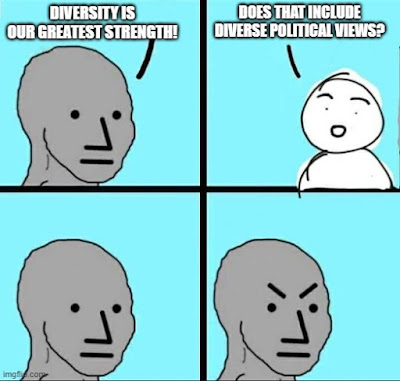