Democracy Is Fake And Gay

Speaking of Happy New Year, woke up yesterday morning to this…

My wife and I plus three kids under 17 at home = $3000 in TrumpBux.
Sure it is imaginary money but we can use that imaginary money to purchase real stuff.
Meanwhile in the political landscape the big news last week was that after Trump said he wasn’t going to sign the enormous bloated bill originally passed by Congress with $600 for the peasants and billions for foreign countries, including Our (Already Wealthy) Greatest Ally, he rolled over with nothing to lose and nothing to gain and signed it anyway. Sure he made a bunch of noise about things he wanted and everyone knows he isn’t going to get but one thing he did say was a freaking wrapped up with a bow on top present for the Democrats. Trump declared that we need $2000/person payments and for us that would mean an additional $10,000.
The Turtle Mitch McConnell, the Republican Senate majority leader for now, has been pushing back on this and he has, believe it or not, valid reasons at least on the surface. That doesn’t change the fact that the Left is eating this up and the media is helping:
McConnell again blocks quick vote on $2,000 stimulus checks, slams ‘socialism for rich people’
McConnell is getting scorched for this, painted as stereotypical Republican who only cares about the rich. One guy, Mr. Rodney Robinson (picture below) tweeted out a charming statement praising the leftist neighbor who assaulted Senator Rand Paul and wondering who Mitch McConnell’s neighbors were, clearly suggesting that he would approve of someone assaulting McConnell:
2019 “National Teacher of the Year” urges McConnell’s neighbors to attack him, praises 2017 assault on Rand Paul
A nationally recognized educator has called on the neighbors of Senate Majority Leader Mitch McConnell to physically attack him, as well as praised the man who assaulted Sen. Rand Paul in 2017 as “a true Kentucky hero.” 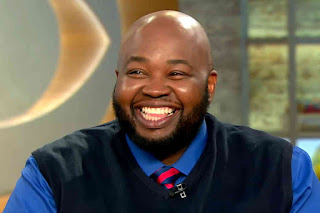 Mitch McConnell is a 78 year old man so obviously what any “hero” would do is assault him with the intent of causing great bodily harm. How stunning and brave! Again, most stereotypes exist for a reason.
I find Mitch McConnell as revolting as I find all of the rest of his ilk. Like essentially every national politician in both parties, he only cares about himself and Mitch is owned by the Chinese, something he shares with Joe Biden (see my review of Peter Schweizer’s Secret Empires for more details on Mitch and the ChiComs). However in this case McConnell sort of has a point. His supposed reasoning for slowing down the $2000 payments makes some sense:
McConnell, R-Ky., in floor remarks lambasted the House-passed bill for $2,000 stimulus checks as “socialism for rich people.” The comments were his most direct to date on his opposition to President Trump’s request that stimulus checks be boosted from $600 in the recently passed stimulus.
“The data show that many upper-middle class Americans have kept their jobs, work remotely and remain totally financially comfortable,” McConnell said. “On the other hand, some of our fellow citizens have had their entire existences is turned upside down and continue to suffer terribly. We do not need to let the speaker of the House do socialism for rich people in order to help those who need help.”
That is actually true. As I have mentioned before during 2020, our family had a pretty solid year financially. We probably made more money last year than at any point in our married lives, started a new business that had a great year in spite of the Chinese coronavirus, our other businesses did well and we are feeling pretty good financially for the new year. The “money” that got dumped into our account last night won’t go for the mortgage or heating bill, it will be used for non-essentials.
In other words, using a shotgun approach and just dumping $2000 per person into bank accounts is dumb.
But here is the catch. It is 2021 and trying to do things for the right reasons is now bad. Even Trump on his way out pointed out that this is politically suicidal, especially right before the special elections in Georgia with the Senate balance on the line: 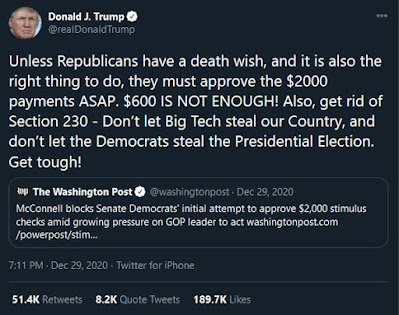 Basically doing something reasonably smart and for the right reasons is political poison in 2021.
A mature, thoughtful person can question $2000 shotgun payments to everyone in America but it hurts you politically because The People don’t want leaders who make sound, sober decisions. They want free stuff and they want it right now!
This is what democracy eventually leads to, carnies bribing the voters with other people’s money. There is no room for statesmen, not that Mitch is a statesmen, only for shysters and hustlers. Only people willing to lie non-stop to appeal to lowest common denominator voters, most of whom are absolute dolts and really shouldn’t get a say in how the government is run, can hold office at the national level. Democracy is all about appealing to the worst impulses of the worst people so you can get to 50%+1.
I have pointed out before that our “leaders” in general are some of the dumbest, most untrustworthy people in our society. Gone are the days of gentlemen farmers who become statesmen for a brief time as a matter of duty and obligation to public service. Now we get people like Joe Biden who have spent an entire lifetime in some sort of political office and have become insanely wealthy as a result, along with their ne’er-do-well kids.
As I have said before, I don’t know what the best replacement for democracy would be but what we have right now is a travesty.