The Ugliness Of The Left

The last five years have exposed a shift in American politics. Gone are the days when we have an election, one side wins and the other loses, and we go back to our daily lives with minor grumbling about politics during the evening news. We are now in an endless 24 hour a day news cycle designed to whip up resentment, anger and hatred and the 24 hour news cycle has found fertile ground for their agitation in the average American, most of whom are still incredibly ignorant in spite (because?) of having access to all of mankind’s accumulated knowledge and information at their fingertips. Perhaps there is something to be said about the difference between information and knowledge for a different day…..

In the rise of anger and hatred, often risibly attributed exclusively to the right, something new has begun to fester in America. It is something I have noticed before but was reminded of again this weekend and that is just how ugly the Left in America has become.
Not simply physically unattractive, although that is true as you can see from any of Andy Ngo’s tweets of Portland antifa mugshots. 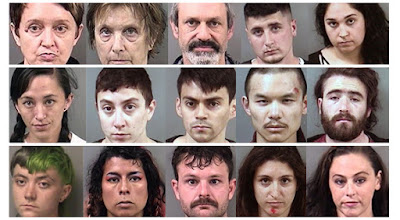 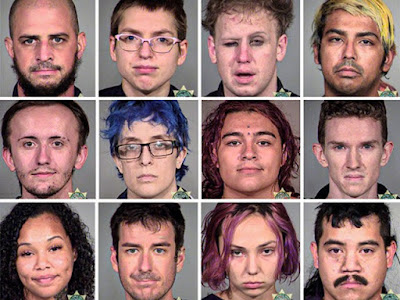 Pretty handsome group of folk all around.
Rather I am talking an ugliness of character and personality.
In 2016 and beyond, the ugliness of the left was exhibited in bitterness and resentment after Hillary lost the election and they collectively refused to accept her loss with any grace and instead dreamed up one crazy conspiracy after another, each one dredged up from their fever swamp imagination more crazy than the last. Ukraine, Trump’s taxes and of course Russia, Russia, Russia! They were furious and their fury was reinvigorated daily by the media. Having little in the way of an outlet other than screeching their fury at the uncaring heavens, many on the left turned their impotent fury toward their friends and family members who voted for Trump. People were summarily unfriended and drummed out of the lives of loved ones because they voted for Literally Hitler. Liberals posted their deeds on social media, gathering acclaim from fellow lefties for the Stunning And Brave Act Of Resistance of clicking a button on social media.

People who voted for Trump that apparently misunderstood our political system and guarantee of free speech and political discourse were blindsided. This happened to us, more with my wife than me because I don’t really give a shit. Liberals and generic Democrat voters were so enraged by a vicious, murderous harpy losing an election that they lashed out the only way they knew how, by crapping all over family members.
Four years later and things are if anything even worse.
With the apparently successful massive election fraud leading to a Biden inauguration in just a few weeks, despite the increasingly unhinged calls to “trust the plan”, you might think that liberals would be content with their “win” and calm down a little. You would be incorrect. If anything, now that Orange Man Bad is vanquished, liberals seem even uglier. Calls for “truth and reconciliation” commissions are common-place as are the increasingly strident calls for violent retribution.
My wife and I got a visceral and personal reminder of this over the weekend. Trump was utterly useless as a President apart from some decent judicial nominations but one thing he did manage to do, quite unintentionally, was to reveal how ugly so many people on the political left are and have always been. Politics on the left, at least for my lifetime, has been driven by the basest of human failings: greed, envy, sloth, lust and resentment. The Democrat Party platform seems modeled on the Seven Deadly Sins: murdering babies, sexual degeneracy of the most grotesque kind, stealing from others you resent for their success.
Obviously there are some awful people on the Right, although far fewer than you might be led to believe from the media and entertainment world. People on the right politically, using that term in the broadest sense, are mostly driven by wanting to be left alone. Conversely people on the left seem obsessed with what everyone else is doing. They are busybodies, the nosy neighbor who is always trying to catch the people across the street doing something wrong. Anyone making a nickel more than they make is clearly cheating the system somehow.
The contemporary left is a haven and a magnet for the ugliest people in our society. The most engaged on the left are the worst. These aren’t people with political differences, they are the living embodiment of the depths of human depravity. There is no room for compromise or unity or reconciliation with them. They have made it clear that is impossible. They will accept only complete submission and perhaps not even that will placate them.
We didn’t want this, we never asked for this but if people will crap all over their own family because of political disagreements it is clear what we are left with. We can no longer co-exist and it is time we stop pretending we can and trying to be the adults in the room.
They have closed off every path but one and they are going to find out that where that path leads is not what they expected.