The Return Of Eddie Gaedel

Baseball is a sport full of history and lore. People who are real baseball fans know all about players from bygone ages and love to argue about who was better. Heck, most of the interesting stuff in baseball is happening off the field. Unlike football which is an endlessly loud game, baseball is leisurely and social. You have plenty of time to chat with your buddies between anything happening.

That brings me to Eddie Gaedel. Eddie was what we called back in the day a midget. He was a statuesque 3’7″ tall. On August 19, 1951 he appeared for a single at-bat for the St. Louis Browns (now the Baltimore Orioles) against the Detroit Tigers, wearing the number 1/8. As he was so small, he had a tiny strike zone and was walked on four consecutive pitches, took his base after bowing to the crowd and was immediately replaced by a pinch runner. Everyone laughed because it was funny and an obvious publicity stunt orchestrated by the owner of the Browns, Bill Veeck. He never played again but he still makes it into the legends of major league baseball. 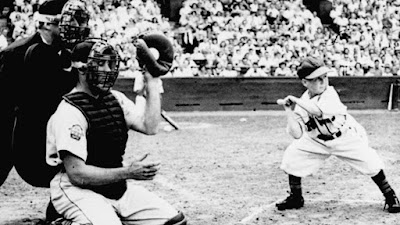 Fast forward to 2020 where everything is fake and gay and ridiculous. Entering the fray is one Sarah Fuller. Ms. Fuller is a soccer player for Vanderbilt who also is a kicker for the football team. No, really. Last week she came on the field for a kickoff during a game against Missouri. It was a magnificent kick, worthy of songs sung in Valhalla.
Actually it was a squib kick, reducing to near zero the chance that anyone on the opposing team might actually try to return the kick because that might mean Sarah would be facing an adult male who probably is around 6 foot tall, over 200 pounds of muscle, running at full speed with a life of experience in playing football. That would have ended either in Sarah getting badly hurt or being humiliated as she ran away.
At my age, having not played competitive football since the 80s, without warming up, I could squib kick the ball that far and could probably at least throw myself in the general direction of the return man. Sarah even had one of the men on the team holding the kickoff for her, I guess so she could get that massive power onto the ball but more likely because everyone knew no one was going to return the kick. 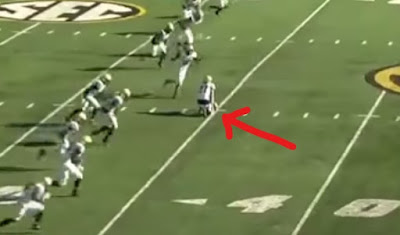 It was a publicity stunt to get some attention to an awful 0-8 Vanderbilt team. I guess she should be happy they didn’t make her kick topless to get more viewers.
With Eddie Gaedel, everyone knew it was a publicity stunt designed to get a laugh, including Eddie. He was under no illusion that he was going to be a regular player because he physically couldn’t play baseball. Sarah Fuller seems to think she is a serious player or something. Being the starting goalie on the championship girl’s soccer team isn’t something anyone is interested in but being the first woman to take the field at this level in a college football game? Stunning/brave. The Instagram account for the women’s soccer team is full of pictures of Ms. Fuller because I guess that is more interesting than women’s soccer, including this hilariously picture lacking any sense of self-awareness. 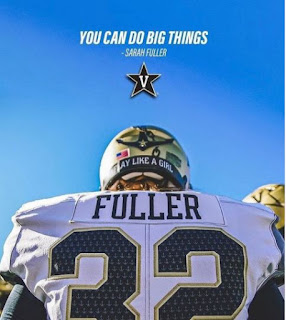 I guess “doing big things” includes kicking a ball 20 yards as a publicity stunt. Also unintentional hilarity from her helmet which reads “play like a girl”, which is exactly what she did with a crappy squib kick. The hidden message behind her “play like a girl” is that this fiasco was newsworthy because a terrible squib kick is literally the best a girl can do in football. Her stunt was the pinnacle of women’s participation in a man’s game.

But because this is 2020, we are supposed to applaud this major achievement by a wahmen no matter how silly or inconsequential. Apparently Ms. Fuller was given a participation trophy for having a uterus by being named the SEC “Co-Special Teams Player of the Week”. According the press release, her kick was “perfectly executed” which I guess was sort of true since the intent was to squib it a few yards so the opposing team couldn’t return it.

The SEC named Vandy’s Sarah Fuller co-special teams player of the week for her one 30 yard kickoff. Good lord. This is all such a sham. According to Vandy her “perfectly executed kick sailed 30 yards.” pic.twitter.com/zFp03x7DRL

Even worse, Ms. Fuller gave a halftime speech to her teammates. As noted in many outlets, at that point she hadn’t even taken the field in a real game yet.
If you were on the fence about whether Vanderbilt using soccer goalie Sarah Fuller as a fill-in kicker for Saturday’s game against Missouri was a publicity stunt or a necessity, you got your answer on Sunday when it was announced that Fuller had given a halftime speech to her new teammates. Keep in mind, Fuller hadn’t yet stepped foot on the field for her kickoff before giving this speech.
Her team is down 21-0. They are in the tail end of an 0-7 season. Their last scheduled game of the season is against the #8 ranked Georgia Bulldogs. They were outgained by Mizzou, a mediocre 4-3 team, by 603 yards to 185. In other words, they really just want the nightmare to end. What could be more emasculating to an already crushed team than to have some girl lecturing them for their failure to be enthusiastic enough while losing. She was mad that they weren’t cheering non-stop, cuz that is what the girl’s on her soccer team do.

My main thing was during the SEC tournament, my entire team was cheering the entire time. It didn’t matter if we were in the locker room or if they were on the sidelines, I think that’s what won it for us. Everybody was cheering non-stop. I just went in there, and I said exactly what I was thinking. I was like, ‘We need to be cheering each other on. This is how you win games. This is how you get better by calling each other out for stuff, and I’m going to call you guys out.’

Well, what would men do without women telling them how you win football games. Apparently these pussies sat there and were scolded by a girl without complaint. No wonder the Vanderbilt team is 0-8 and a miserable excuse for a football team. A real man would have called bullshit and walked out, not sat there being humiliated.
Never one to be out-woke, one writer for ESPN described her publicity stunt like this: 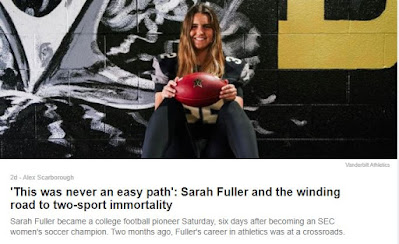 Sure, I mean she is basically just like Bo Jackson who could homer in a major league baseball game and then run over The Boz in an NFL game. A squib kick is really the same thing.
Immortality.
I wonder if she will get votes for the Heisman Trophy?
Vanderbilt has a little over 7,000 undergrads, so about 3500 men. Are you telling me that if the team was that hard up for a kicker, they couldn’t find a single guy on campus who had far more skill than Sarah Fuller to kick? Statistically speaking, you should be able to find dozens or hundreds of male students on campus with experience either in football or playing men’s soccer (Vandy apparently doesn’t have a men’s soccer team, having dropped the men’s team in 2006. Thanks Title IX!) who would be more qualified and more skilled at being a kicker than Sarah Fuller. Again, when I was an undergrad and way too small to be a position player on any Division I team, I still could kick at least as well as Ms. Fuller and back then I could at least make a passable attempt at tackling if I had to.
If you needed more reasons to stop watching sports, this should have been enough for you.