The End Or Just The Beginning?

When was the last time you saw headlines that didn't include something about the Chinese-manufactured coronavirus?
January 2020 was the month that the "impeachment" trial of Trump was going to take place in the Senate and everyone knew that it wasn't going anywhere. We were ramping up for the Iowa caucuses and New Hampshire primary in February. It was lining up to be a pretty intense election year and I had been predicting Trump would lose. My blog posts in January didn't mention coronavirus as all as far as I can tell.
Then late in the month the first case of the Chinese bioweapon naturally occurring virus was diagnosed in the U.S. and this story from CBS News, CDC confirms first case of coronavirus in the United States, on January 21st ended with these words that seem almost laughable now...
The virus was originally thought to be spreading from animals to people, but CDC officials now say there is evidence that "limited person-to-person spread is happening." Nine deaths from the virus have been confirmed so far, according to The Associated Press. In addition to the U.S., cases have been reported in China, Thailand, Japan, Taiwan and South Korea.
Last month, patients experiencing fever, cough, and difficulty breathing began cropping up in Wuhan, in central China. More than 275 cases have now been confirmed in China, according to the World Health Organization.
Dr. Nancy Messonnier, director of the CDC's National Center for Immunization and Respiratory Diseases,  told reporters Tuesday that news of the first U.S. case "is concerning."
"We expect additional cases in the US," she said.
The CDC is raising the travel health notice from level 1 to level 2, warning older patients with underlying health conditions that they may be at increased risk for severe disease.
At the beginning of 2020 the coronavirus was "concerning" and by the end of 2020 it was a gobal "pandemic" being leverage to shut down the world's economy.
We've come a long way baby!
Then May of 2020 rolled around and a drug addled career black criminal named George Floyd was arrested by Minneapolis police for trying to pass a counterfeit bill. He resisted arrest for an extended period but all most of us saw initially and for months afterward was a White police officer kneeling on Floyd's neck. Floyd died, mostly as a result of overdosing on drugs but his death was used by the media to whip up outrage in the black community. Several other black men died, mostly in the course of resisting arrest after committing a crime and were widely covered by the media. "Protests" followed that quickly turned into riots and looting and the most violent year in recent memory began to catch fire. Shootings and murders are skyrocketing and most of it is concentrated in the same black community that complains about the police.
The combination of the coronavirus panic and the rioting led to unprecedented levels of gun buying and a widespread shortage on ammo. Through November of 2020, the number of firearms purchased was off the charts: Americans have bought 21 million guns in 2020, up 73% from 2019. Ammunition is hard to come by and when you can get it, the prices are out of control. Even cheap range ammo is more than quadruple what it was late last year.
Then of course there was the election and I have said enough about that but suffice it to say that we witnessed the most fraudulent, corrupt election in modern American history and the Left got away with it. Completely. In doing so they exposed the ugly truth that there can be no accountability for malfeasance in Washington D.C. because the people who are supposed to provide oversight are the same people who need to be investigated. Who is going to investigate the FBI and DOJ? Many conservatives held out hope that the Supreme Court would step in but it was clear that they had no intention of doing so. Apparently letting an election be stolen with a peaceful transition of power was better than overturning the fraudulent results and leading to mass civil unrest and violence.
There is a sense of desperate optimism in the air. A lot of people think that the date changing from 2020 to 2021 will somehow exorcise the evil spirits that have plagued us for the last 12 months. Those people are in for a rude awakening. If anything, the signs point toward 2021 being a worse year than 2020 and that 2020 was the beginning, not the end. 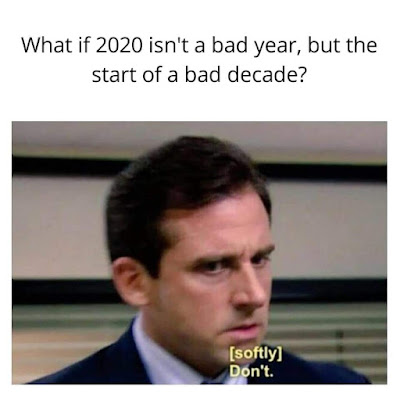 There is a new, more contagious coronavirus. A man with dementia is going to (temporarily) be President. The Left in America is emboldened and impatient. Our foreign enemies are laughing at us and our internal enemies are ascendant. Crime in 2020 was out of control and Biden seems to be signaling that his bigger concern is policing the police.
Yeah, 2021 is going to be a ton worse.
Even setting aside what a shitshow 2020 has been, think for a moment about the significance of that year. For someone who was a kid in the 1970s and 1980s, the very idea of the year 2020 seemed like a fantastical futuristic era. 2020! Flying cars! Exploring space! As I wrote in my post The Dumbing Down Of America, we traded a glorious future for the doomed crusade for "equality" in a multi-cultural nation.
America is getting dumber because Americans are less intelligent. Both of those are by design. You can quibble about the symptoms all you want but America today is not a nation that could accomplish what we did last century in splitting the atom, landing men on the moon and launching the Information Age. It is only thanks to the structures put in place last century that we haven't been reduced to subsistence level living yet but that is coming.
Practically speaking, other than never going back to the moon, that means that a shrinking pool of above-average intelligent people are going to have to carry the intellectual burden for a rapidly expanding mass of imbeciles. In turn that also means that we will have a functional aristocracy that holds the genetic means to perpetuate their primacy. When we had a hereditary monarchical system, marriages were carefully arranged to benefit both aristocratic families and I can see that happening here as well, as the most intelligent and powerful see reproduction as their legacy. Meanwhile, the Clevon's of the world will continue to spread their seed far and wide.
Far from a utopian, advanced future, 2020 is the epitome of the future dystopian nightmare we are heading for, proving George Orwell and Aldous Huxley were right.
We are not headed for a brighter, more prosperous and free society and what is more, no one is pretending we are. Today it is all about looting what you can while you can. It is a hard pill to swallow but this is where we are today.

I agree. Everyone is in a looting spree - including transgenders in Pakistan. Get yours while you can. https://t.co/vbcwurbObV

Maybe that makes me black-pilled or a "Debbie Downer" but better to be realistic about the future than playing the Pollyanna who thinks we can turn this thing around.
The only difference between today and tomorrow is that we are one day closer to Biden taking office and the trust the plan, release the kraken types wondering when Trump will unveil his secret ace in the hole.
So happy new year I guess.
Posted by Arthur Sido at 10:51 AM