Once upon a time in America, the medical community was probably the most respected and trusted profession. We trust doctors with our most intimate issues, stuff we would be embarrassed to talk about even with our spouses. We go them believing they will have the answers we need because we also believe they are the result of the most rigorous screening process, years of schooling and the often brutal crucible of being an intern.

In response to their level of training and the trust we place in them, being a doctor is one of the most lucrative fields out of any profession. Even family practice and OB/GYN doctors for the most part make a six figure salary and the specialists? Pay scales in the mid to upper six figures is common-place, something I have observed frequently in my work as a banker and in the retirement plan industry. As I have mentioned before, my father is a retired family doctor and was considered a pillar of the small community that I grew up in.
However, the medical profession today is not what it used to be. That things have changed and not for the better is a common refrain from people over 40 and especially people 60 and up. Younger people mock the older for pining for the “good old days” but there is a reason that we have shifted away from looking forward to better days to come and now look backward with nostalgia and regret at what we have lost. We were promised that “progress” would bring us an endless progression towards something better but mostly progress seems to be making things worse.
For decades the liberal arts have been infected with neo-Marxism, moving from useless to outright dangerous. What students are being force fed in virtually every liberal arts department is directly contributing to the undermining of our society and paving the way for totalitarianism. If I were a more radicalized person I might suggest that the university system as a whole is an enemy of the people. Good thing I am not a radical person.
That has been the case since long before I was in school but for the most part the “hard sciences” were mostly insulated from this, other than a few humanities courses that the nerds were required to take. It was generally understood that there are some constants that are true regardless of your political view. 2 plus 2 is always going to equal 4. The laws of physics and chemistry are constant.
This is changing. More and more we are seeing the neo-Marxist thought police trying to remake the hard sciences into their twisted, woke image. It no longer matters what is objectively true or false, only that “science” be viewed through the lens of racial, gender or sexual preference grievances. In 2020 it has even entered the field of medicine. A couple of examples. First the American Medical Association, which represents a small but still significant percentage of American physicians, decreed in November 2020 that race is a “social construct”:
New AMA policies recognize race as a social, not biological, construct
What the hell does that mean? It means this:

That race is just a “social construct” will come as a surprise to blacks who suffer from Sickle-Cell Anemia that is found almost exclusively in people of sub-Saharan African ancestry, “about one out of 365 African-American children” in the U.S. or Ashkenazi Jews who have the Tay–Sachs disease genetic disorder that effects “1 in 3,600 Ashkenazi Jews”. It was not controversial in the least to identify people by race for all of modern medical history, the trait that after sex is the most distinguishing for a human. More on that in a moment but for now just know that anyone who says that race is a “social construct” and the difference in races is just “skin color” or the amount of melanin present in skin has outed themselves as a fool regardless of how many academic honorifics they have behind their name.

Telling people that their racial risk factors don’t exist isn’t good medicine, it is malpractice and a violation of the oath every doctor swears.
It is also interesting that we find ourselves in a place where simply not being racist isn’t good enough. We have to be actively “anti-racist”, a term that mostly means “White people who didn’t do anything giving money to non-White people who haven’t suffered anything”. In a year when we were told there was a pandemic so severe and dangerous that large swaths of our economy and society were put on hold, when people were told they couldn’t go to church or gather with their families for Thanksgiving and Christmas, it seems odd that the American Medical Association is taking the time to undermine a basic human characteristic in a vain attempt to placate the strident screeching of people outside of the medical community.
The AMA is not alone. This little gem came from the New England Journal Of Medicine…. 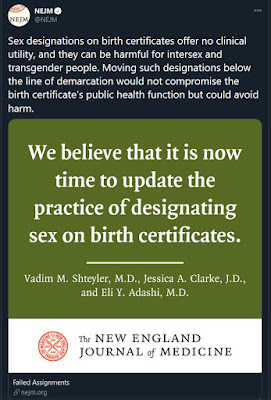 You don’t “designate” sex on a birth certificate, you observe and record sex on a birth certificate. With the exception of people with extraordinarily rare genetic disorders, when a child is delivered it either has a vagina and the accompanying internal reproductive system that are found in girls or it has a penis and testicles and is a boy. Those are the two options. When our four boys were born, we didn’t designate them boys on a whim, we recognized that they were boys and when our four girls were born, we didn’t designate them girls, we simply acknowledged what was already apparent, that they were girls and therefore were not and never would be boys.
Sex and gender are the same thing and they are not “assigned” or “designated” at birth, they are an observed, immutable fact. Even if you lop off a dude’s junk and make an artificial opening simulating a vagina, he is still a he. A mutilated, mentally ill he but a he nevertheless. Having a crewcut doesn’t make you a boy and wearing panties doesn’t make you a girl.
I assume virtually all doctors find this sort of thing to be nonsense but I am also quite certain that younger doctors have been force-fed this nonsense to the point that they are starting to believe it or at least those who are ambitious will say they believe it in order to land the most coveted spots in research and academia.
Even the process for selecting medical school students is turning into a farce and we have first hand knowledge of this. Most medical schools are desperate for black and mestizo students to break up the overwhelmingly White/Jewish/Asian demographics. The recruiting videos for medical schools always feature as many black students as the school can round up, and a black or Middle Eastern girl wearing a hijab is even better. Pretty much every medical school has a “diversity officer” from the faculty. A high achieving White applicant with top tier MCAT scores, a great GPA and years of actual clinical experience is going to get ignored in favor of racial or sexual minorities, even with drastically lower scores because producing great doctors isn’t good enough, medical schools need to have a student body that “looks like America” even though America is full of idiots.
As the world gets more globally connected, we are going to see diseases like the (now apparently mutating) Chinese manufactured coronavirus and ebola spreading faster than ever. Add in an aging population in advanced nations and we are looking at a huge uptick in the need for quality medical care. What we are getting instead are doctors who pretend that race and sex are just social constructs and medical school students who are chosen for their ability to break up the monochrome student body on the school’s social media pages.
Mark it down. The medical profession in school now is the least prepared to deal with actual serious medical issues than any who have come before it in the last half century. Medicine is a science, not social work. We are going to rue the day that the woke loons got their claws into the medical profession.