An Ideology Of Misery

Here is a quick thought experiment for you:
Think about prominent socialists and other far-left figures in America.
Now ask yourself a question:
Can you think of single one who is not a miserable, perpetually angry person?
Is there anyone on the far-left who is cheerful and pleasant? Can you name a far-left personality you would want to have coffee with or spend any time with them at all? I would rather be force-fed broken glass than spend 30 seconds in the company of Rachel Maddow.
I got to thinking about this based on a prior post, The Ugliness Of The Left. John Wilder left a comment that reads:
The pathology of the Left is self-hate. They feel pain every day of their existence, and want to burn it all down.
That rings true. My reply:
Yep. It attract unhappy people bent on making everyone else as miserable as they are, just like feminism is how homely women get more attractive women to be as bitter and lonely as they are.
It reminded me of an exchange on Twatter. The UN Women account, the same UN that sends "peacekeepers" from third world nations to other third world nations to spead cholera and apparently wholesale rape the ladies on an industrial scale, posted something typically stupid: 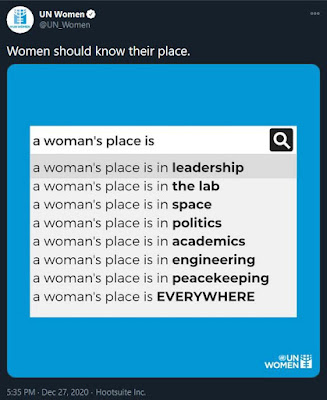 How can women make me a sammich in space?
Anyway, some bimbo who fancies herself a radical feminist or some other bullshit said that this also means that women need "spaces" without men. The whole "spaces" thing is so facile that using it unironically is a sure sign of an intellectual lightweight, in the same way that people talking about "black bodies" instead of "black people" are universally morons. Anyway, being in "spaces" without men seems to be her whole reason for existing.

I suggested that she probably had no problem finding spaces without men. Just trying to be helpful. She replied and blocked me, no idea why, but I still got a screenshot of her response. 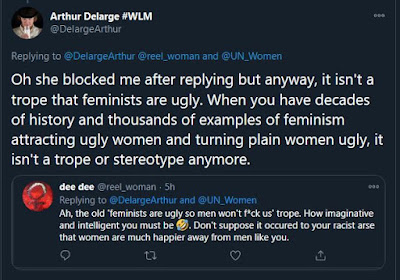 Really, I am sure she can find men to hump her. Even heinously ugly women can get men to have sex with them. Most men have at least one girl in their highlight reel that they are not proud of. So being a depository for guys who are hard up isn't really an accomplishment but I would bet everything that I own that "dee dee" here hasn't had a significant relationship a very long time with a man that lasted longer than it took for him to roll over and get dressed. Men will put up with some bullshit and/or crazy long enough to get laid but sticking around afterward with some chick who is undoubtedly as unpleasant in real life as she is online? Oh hell no. I am sure you can spend a long time unpacking her various mental illnesses built up over a lifetime of disappointments when it comes to the opposite sex.
Think about another prominent proto-Marxist group, the various racially aggrieved militant movements mostly under the umbrella of "black lives matter". Is there a one of their leaders who has any sort of positive, uplifting message? Not really, in general their entire movement is defined by their hatred for White people and their demands for free shit paid for by those same White people. At least MLK would occasionally say stuff that was encouraging for the future but "civil rights" leaders today have only resentment and hatred in their rhetoric. Their goal seems to have little to do with achieving "equality" by lifting blacks up but only "equality" by tearing Whites down to their level. That is an equality of sorts I guess.
My point is this, overall what is commonly called "liberalism" in America, an ideology that is just proto-Marxism, is the creation of miserable, angry people who want everyone else to be as miserable and angry as they are in order to feel less miserable about themselves. It attracts miserable, maladjusted people like manure piles attract flies. But surrounding yourself with other miserable people isn't enough. As long as one person is happy and content, it is like a festering boil. There is nothing more hateful to the Left than a person content with their situation. A man working a job and doing it well for fair pay? He must be exploited! A women content to stay home and care for her children? She is brainwashed by the patriarchy! In other words, anyone who is happy with their lot in life must be made to be unhappy.
What we call "conservatism" is rooted in a general happiness with the status quo, at least at the grassroots level. In order to make people want to overthrow the system, which has been generally great in comparison to living in any other country for the vast majority of people, you must convince them they are unhappy in spite of all of the evidence. Why else would attractive, normal girls go off to college and turn into circus freaks covered with tattoos and body piercing unless you convince them that although they seemed happy, they really weren't. Why would blacks who have it better by every conceivable merit as Americans somehow become convinced that they are oppressed at every turn? Because the Left plays on the natural human tendency toward discontent.
The proto-Marxist Left are unpleasant, ugly, envious and angry people who don't want to become happy and content. They love to wallow in their anger and misery and their ideology is based in making everyone else miserable.
Posted by Arthur Sido at 5:56 PM