When it comes to obvious weapons, we have it figured out. Many Americans have an arsenal in their home that would outgun a well equipped platoon in every war prior to Vietnam. Thanks to modern optics and ballistics, tens of millions of Americans who hunt have rifles capable of lethal accuracy out past 500 yards. Improvements in bullet design have made even lighter recoil handguns like the 9mm incredibly lethal. Thanks to our endless wars on behalf of Our Greatest Ally and the Uniparty Military-Industrial Complex, we also have millions of veterans in the civilian worlds, many with combat experience and most with a less than favorable opinion of the government and ruling class.
In other words, if it comes to picking sides and shooting at each other, we are in enviable shape.
That's great and all but....many wars are won or lost before you pull the trigger.
This is a topic I have addressed before but it is getting more real than ever. Our enemies (and make no mistake they are enemies, what else do you call someone trying to exterminate you and excise any sign you ever existed?) might be obese blue haired gender fluid freaks or scrawny soyboy beta orbiters or even urban gangsters who can't shoot worth a shit, but they can still throw a Molotov cocktail into your house.
One of the most powerful prohibitions in Western civilization is found in the Old Testament: thou shalt not kill. Taking the life of another person without just cause is the most grave offense in our society, carrying the most serious legal consequences. That is deeply ingrained in our culture and it requires a great deal of psychological manipulation to overcome. We have seen examples of this in the past. In World War II, the U.S. propaganda machine was working overtime to paint the Germans and Japanese as not merely enemies to be defeated, but as literal monsters, sub-human beasts. I provided a couple of examples in last summer's D-Day remembrance post: D-Day 76 Years Later: What If They Knew?
The tactic of dehumanizing your intended victims is hardly new. The most famous example is the portraying of Jews as vermin and rodents in Germany under the Third Reich. As is so often the case, the German behavior is amplified and often exaggerated while their Communist enemies to the east are ignored. A chilling recounting of the practice of labelling the enemies of the Soviet state in order to dehumanize them can be found in this piece at First Things, Suicide Of The Liberals. The whole piece is worthwhile reading but this section was shared elsewhere
Between 1900 and 1917, waves of unprecedented terror struck Russia. Several parties professing incompatible ideologies competed (and cooperated) in causing havoc. Between 1905 and 1907, nearly 4,500 government officials and about as many private individuals were killed or injured. Between 1908 and 1910, authorities recorded 19,957 terrorist acts and revolutionary robberies, doubtless omitting many from remote areas. As the foremost historian of Russian terrorism, Anna Geifman, observes, “Robbery, extortion, and murder became more common than traffic accidents.”
Anyone wearing a uniform was a candidate for a bullet to the head or sulfuric acid to the face. Country estates were burnt down (“rural illuminations”) and businesses were extorted or blown up. Bombs were tossed at random into railroad carriages, restaurants, and theaters. Far from regretting the death and maiming of innocent bystanders, terrorists boasted of killing as many as possible, either because the victims were likely bourgeois or because any murder helped bring down the old order. A group of anarcho-­communists threw bombs laced with nails into a café bustling with two hundred customers in order “to see how the foul bourgeois will squirm in death agony.”
Following that was this chilling line: Sadism replaced simple killing.
I am not joking. Read the whole damn thing.
Sadism is something most people don't really understand. Why would you hurt someone for the sheer pleasure of causing them pain? It is unfortunately all too common even in America and is growing more common with each passing day.
Anyone with a computer has seen examples of this. The earliest example was a widely distributed video showing the attack on Reginald Denny during the L.A. riots in 1992. Denny was just driving his vehicle, made a "wrong" turn and was set upon by several groups of blacks, who dragged Denny out of his truck, beat him unconscious and then when he managed to get back up and tried to get away, was assaulted again. You can watch the stomach churning video here. The most famous image was of a 19 year old black, Damian Monroe Williams, coming up to the defenseless Denny, throwing a cinder block at his head and then dancing in jubilation at the suffering he had caused. 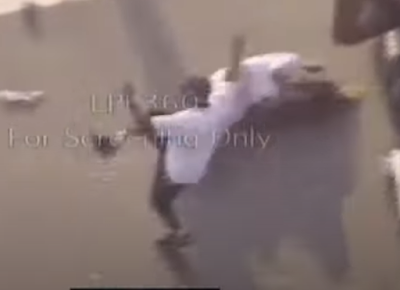 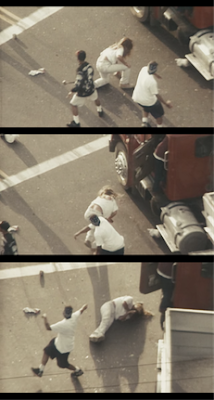 The people assaulting Denny were not outraged over the Rodney King beating case, they simply saw a chance for mayhem. Then there are the videos of the "knockout game", assaulting random people, with no warning or provocation. This likewise leads to celebration and mirth. These are not people lashing out in anger because of "injustice", they are simply people who love hurting others.
The rise of a totalitarian system like Communism draws out the worst people and often rewards them for cruelty. After all, if someone is a "counter-revolutionary", or "bourgeois" or a "kulak", then they aren't really people. The kulaks in Ukraine had to have done something wrong, why else did they have more than other people? Their own modest success itself as seen as proof of wrong-doing, rather than evidence of the virtue of hard work and responsibility.
Huh. That is starting to sound vaguely familiar.
Today we aren't "bourgeois", we are "racists", or "transphobes" or "homophobes" or "White supremacists", literal "Nazis" or just plain old "Trump supporters". Whatever label we are associated with, the Left is back to their old rhetorical games. Once again, their enemies are demonized and dehumanized for holding the wrong sort of political opinions.
For example, Ms. Bandy X. Lee, an Asian woman whose family at some point decided to leave their Asian nation and come to a country full of White supremacists and Nazis. Ms. Lee makes the tired and risible comparison between the Hollywood image of Germans in the Third Reich, under the "spell" of Hitler, with the 73 million Americans who would go to the polls to cast their ballot for Donald Trump. According to Ms. Lee, the firebombing of Dresden in the waning days of World War II, an act of terror and a war crime targeting civilians, was necessary to "break the spell" of Hitler. The firebombing of Dresden, unlike the atomic bomb attacks on Hiroshima and Nagasaki, served no strategic purpose. Berlin itself was overrun and Hitler committed suicide, that was the trigger for Germany surrendering. Regardless, to Ms. Lee, the German women and children had it coming when they were burned to death and apparently something similarly horrible would be appropriate for people who dare vote for Trump. 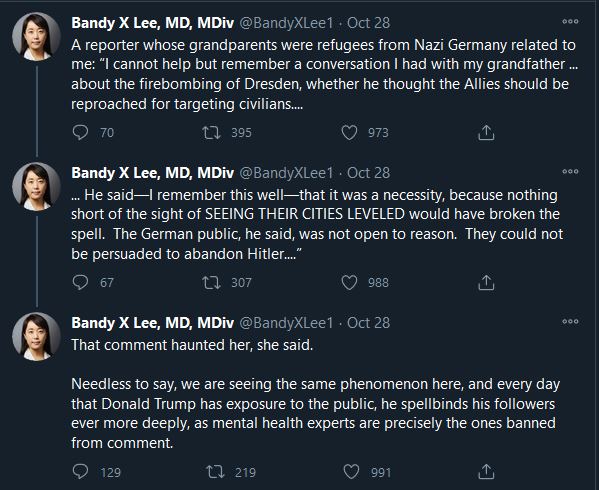 The idea that the President of the United States having access to speak publicly to the people of the United States is harmful and that his "exposure to the public" should be curtailed is so wacky that in any year other than 2020 she would be laughed out of the public sphere. Likewise the idea that "mental health experts" are "banned from comment". Ms. Lee styles herself a mental health expert and here she is publicly calling on the President to be censored and his followers perhaps firebombed for their own good. Who is banning her from commenting?
Who is Ms. Lee? 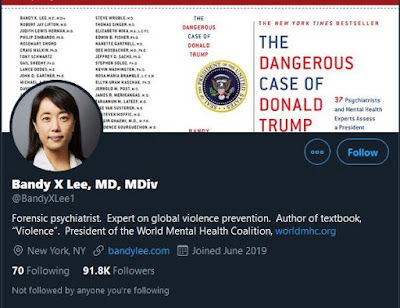 Oh she is an "expert on global violence prevention" who justifies the firebombing of Dresden and suggests we might need the same here in the USA. Plus she has a Masters of Divinity degree. I wonder if her thesis topic was "Who Would Jesus Firebomb And Why The Answer Is White People"?
Also the President of the World Mental Health Coalition, which makes perfect sense as the vast majority of the people who work in the mental health field are themselves crazy as hell and are drawn to the field out of some strange projection. Really, there isn't a class of people in the country who are less mentally healthy than mental health workers.
The language keeps getting more heavily infused with threats of violence, the dehumanization gets more stark.
We can't keep thinking of these people are just some misguided fellow Americans who just need to hear a better argument for small government. The American Left is chock full of deranged, violent people who think widespread genocide sounds like a swell idea. They are winning the war of rhetoric because they are openly calling for our death while we try to fumble around with not offending anyone. These people are Communist wannabes who not only didn't learn the lessons of the Soviet Union, the Khmer Rouge and the Great Leap Forward, they think the real lesson was that they need to be less gentle this time around.
The history of Communism is drenched in blood. We cannot allow it to fully take root here or the result will be the same: our children starving, our families destitute and on the street and ultimately all of us dead.
Posted by Arthur Sido at 9:33 PM