Friday of election week and the "votes" are still being made up/counted.
The election boards in the disputed areas have been slow walking the coup. Dribs and drabs of Biden "taking the lead". Biden issues statements counseling patience and his fellow conspirators are uttering pious sounding bleating likes "count all the votes", something no one is disputing provided the votes are a) legitimate and b) were cast on time. It is a giant psyop to convince the normies that Biden won and it is Trump being unreasonable.
This started a long time ago with leftists suggesting Trump wouldn't leave quietly if he lost. Of course he won't leave quietly if it is clear that there is rampant fraud, and that certainly is clear because it was the plan all along. That was what worried the Democrats about Amy Coney Barrett, they knew this could end up at the Supreme Court somehow.
This is what will happen. Biden will, at some point this weekend, be declared by the media to be the "winner". They will start to release transition plans and make conciliatory, "let's come together" comments. Trump will go crazy on Twitter. The media will spin this as Trump being unhinged and trying to deny the will of the people, and what is worse is that it appears that Fox News is on board with this, undercutting some of Trump's less engaged voters.
By Monday the theme will be Trump and his followers are sore losers who are caught up in "conspiracy theories" of election fraud. The people claiming this are the same people who pushed the Russia conspiracy theory for four years. Next week is when the real action starts in the courts.
Whether Trump is declared the winner or not, this is the last election in which he will be a candidate. When he leaves office, there will be an enormous orange void in what remains of the Republican party. The establishment GOP, the pawns of the Chamber of Commerce and Wall Street Journal were immediately giving us this spin... 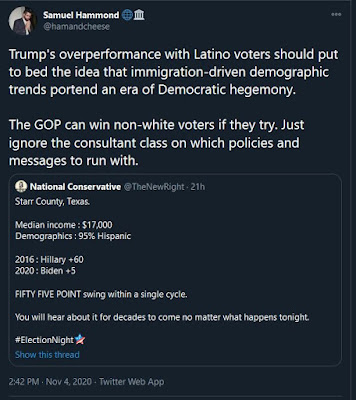 There was a lot of cheering that the Republican party is now the party of the working class, which it already was under Trump, and obviously they just need to pander harder to non-White voters to remain electorally viable. The exit polls show a different story. 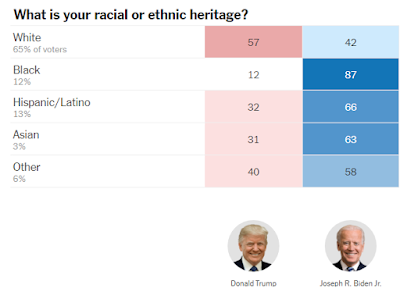 That is a slight improvement over 2016 for Trump...

So you would think that Trump doing better among non-White voters should have translated into a huge electoral victory instead of the narrow win he had on Election Day. But it didn't and here is why:
Trump gains with Latinos, loses some white voters - exit polls
The Republican president appears to have lost some support among white men and some older voters in Georgia, Pennsylvania and Wisconsin, according to Edison polls.
While Trump is still winning the majority of those voters, some of them switched to supporting Biden, the exit polls showed.
The group that Trump had to win to be re-elected, White men, he did worse with than in 2016. Trump has been focused on every group except the one that elected him in the first place. Even Matt Walsh, who seems to be slowly waking up, understands this. 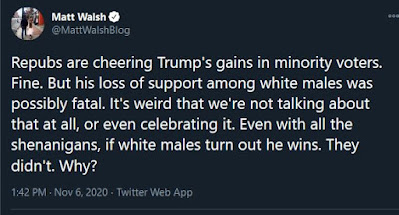 A recognizable Republican party doesn't win without big turnout from White voters and that failed to materialize. Trump didn't even get a third of mestizo voters or Asian voters. Those are the groups who are poised to increase their numbers drastically under a Biden administration. It is simple math, if you lose 2 to 1 with new voters, you lose every election. The math favors the Left and they know it. They may have gotten ahead of themselves in 2020 as they often do but victory is in their grasp. Even if White voters have a significant awakening it is too late as we will be swamped unless we somehow started to see Republicans getting 80% of the White vote which just isn't going to happen.
One of the dirty secrets, or not so secret to people paying attention, of the 2020 election is that not only was Trump fighting his Democrat opponents and the entire government, media and entertainment establishment, he was also being stabbed repeatedly in the back by other Republicans. These Beltway Republicans just want things to go back to the way they were before Trump, when win or lose really didn't matter because they still had their cushy gigs and got to go to the best restaurants and got invited to the right cocktail parties. When Trump won the nomination and then the election, it made the Republican brand completely toxic in the exclusive East Coast circles, especially in D.C. It seems here in the aftermath of the election that either Trump or his team or both were completely taken by surprise that the Democrats were cheating like crazy. I suspect a lot of that is because even on the Trump campaign team, a lot of Republicans don't want Trump to win so things can go back to the way they were. A GOP operative in D.C. can live a long and comfortable life even if the GOP loses most elections because they still get paid.
The big takeaway so far is this:
The Republic is dead and we are in a post-political world now.
If we can't even manage to get a legitimate vote count in a huge national election, then none of our elections mean a damn thing. Half of the country was just disenfranchised and is slowly being censored into silence. We can't speak freely, we can't turn to the ballot box. The basic social contract of America is broken and it cannot be fixed. In other words:
Whatever change is going to come in the future will come outside of the political process.
If Trump is gone in January, as lackluster as he was, who will represent us? The GOP will pivot right back to the being the party of corporate tax cuts, endless wars, mass importation of cheap immigrant labor and pandering to racial and sexual minorities. Sure that won't actually inspire anyone to vote for them but it will keep the contributions flowing and doors in the private sector open, and that is what it is all about. All those politicians jumping on the MAGA train will jump right back off again without missing a beat.
Three days after the election and we have the worst case scenario: a Trump lead vanishing, obvious fraud taking place and the election possibly ending up in the courts. Two men will claim to the lawfully elected President. Biden's team is apparently planning something official for tonight....

Right on cue, making an announcement Friday night and then hoping people get sick of the election and are distracted over the weekend.
So what comes next?
The people who built this country and who maintain this republic are without a voice. There are a bunch of ways that is going to lead to human misery on a never before seen scale.
That should be a cheerful thought to go into the weekend. Enjoy!
Posted by Arthur Sido at 12:51 PM