This Isn't What We Wanted

Yesterday was a day much like every other day in 2020. Some normal, mostly White, Americans held a peaceful gathering in support of the President of the United States in our nation's capitol. This is something that is expressly guaranteed protection in the Constitution and intuitively it should be even more protected in Washington D.C. People march and protest all the time in D.C. But this is 2020. After the march was completed and the large crowds of Trump supporters dispersed, a few solitary small groups stayed in town. Cut off and outnumbered, they are precisely what the cowards in antifa and bLM desire.
The videos began circulating on social media. People trying to have dinner with explosive devices thrown at them. An older, frail person with a Trump t-shirt shoved down by some scrawny pussy dressed in black. Someone else sucker punched and kicked while helpless on the ground. A child terrified, a young women crying in fear. White men trying to walk away, screamed at by black women and hit when their backs are turned. They can't fight back, the cops who watched this happen would leap into action if they tried to defend themselves.
This is what they want. The weak, the outnumbered, the defenseless. Their entire impotent existence finds meaning in terrorizing those who cannot fight back. They feed on fear, they find validation in the misery of others. This is the Joe Biden base: resentful, ignorant, violent.
The message is being sent loud and clear. Not only are our elections meaningless and the outcome pre-determined, but half of of the country can't even gather peacefully in our nation's capitol without being attacked by Communist thugs. As the law enforcement apparatus in D.C. and much of our government warns of the dangers of "White supremacists" and "far-Right terrorists", no one seems to notice the terror actually happening on our streets.
Over 70 million Trump voters, many like me who were not enthusiastic about Trump but preferred him to the alternative, find themselves being completely shut out of the very government our forefathers created and fought to protect. 70 million people with the bulk of the over 400 million firearms in this country, and millions of us are very comfortable and proficient with their use. 70 million people who have up until now had too much to lose to do anything crazy but find ourselves being cornered and quickly running out of reasons for restraint.
That is not a threat of violence or empty online bluster. That is just how it is.
We didn't ask for any of this. This wasn't our idea. We just wanted to be left alone, work our jobs, provide for our families, maybe watch the game with some buddies. Occasional cheap vacations and one day to retire and live out our golden years watching our grandchildren grow up.
You wouldn't let it go. 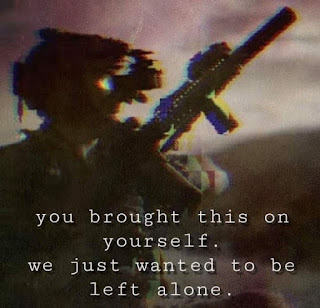 Well said.
A desperate people with little left to lose are very different from people waving MAGA flags and running when attacked. It has mostly been idle talk to date but I feel like that is changing and pretty soon the Left is going to find out what a real radicalized Right-wing looks like. We aren't like this by nature but we are being pushed that way. 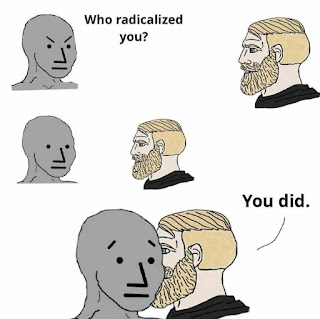 When it comes, they will have no one to blame but themselves.
Feeling pretty black-pilled and in a dark mood today.....
Posted by Arthur Sido at 9:50 AM