They Are Wearing Hockey Skates In Perdition....

...because hell just froze over.
My hometown newspaper, The Toledo Blade, a uniformly leftist publication my entire life, made a pretty stunning endorsement today: 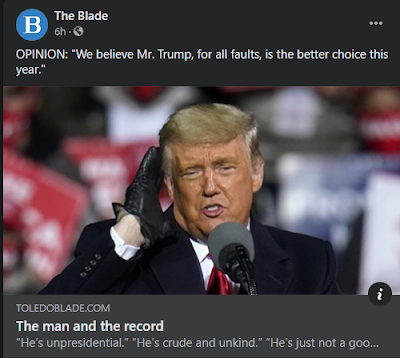 You have to understand, Toledo is a union town, a blue collar Democrat town. It has been represented in Congress by Representative Marcy Kaptur, a Democrat, since 1982 when I was 11 years old and other than 1984 when she beat local celebrity Frank Venner by 12%, she has never been seriously challenged. People in Toledo, White working class people, still think that Democrats represent the working class instead of the privileged class and the aggrieved minority underclass. At least they used to.
It seems like the Blade is realizing that working class White people have been voting GOP in Toledo since Reagan and that Joe Biden has promised all sorts of things that will directly harm these same people. I'll let the Blade speak for itself, the editorial is behind their risible paywall...
Let’s look at the Trump record:
Under Donald Trump the economy, pre-Covid, boomed, like no time since the 1950s. Look at your 401(k) over the past three years.
Unemployment for black Americans is lower than it has ever been, under any president of either party.
Under Mr. Trump, our trade relationships have vastly improved and our trade deals have been rewritten. Thanks to him, middle America is on the map again, and the Appalachian and hourly worker has some hope.
Has Mr. Trump done enough for these struggling fellow citizens? No. But he recognized them. Maybe he was not articulate, but he recognized their pain.
No one ever asked the American people, or the people in “fly-over,” country if they wanted to send their jobs abroad. Until Mr. Trump. He has moved the debate, in both parties, from free trade, totally unfettered, to managed, or fair, trade. He has put America first, just as he said he would.
He also kept his promise to appoint originalists to the Supreme Court of the United States. His third appointment, Amy Coney Barrett, is the best of all — a jurist whose mind and character and scholarship ARE first-class. We hope she stands against both judicial and executive excess.
Finally, let’s talk about one of the most important concerns in this region — energy. Under Mr. Trump the United States achieved energy independence for the first time in the lifetimes of most of us.
Donald Trump is not Churchill, to be sure, but he gets things done.
Powerful words and true, and even a pretty gratuitous shot at polit-whore Kamala Harris.
Mr. Biden is too old for the job and fragile. There is a very real chance he will not make it through the term. Mr. Trump is also too old but seemingly robust. But in Mike Pence, Mr. Trump has a vice president ready to take over, if need be. He is a safe pair of hands. Kamala Harris gives no evidence of being ready to be president.
Zing!
It is probably too little, too late since over 60 million votes have already been cast but America is on the brink of making an enormous mistake and being manipulated by the media and corporate-Deep State partnership that seeks to continue the path toward destroying the American dream.
Posted by Arthur Sido at 7:34 PM