There Is No Kraken 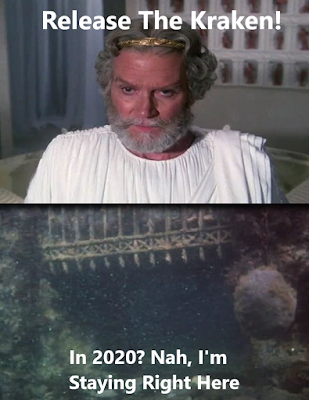 With Thanksgiving coming up tomorrow, at least in free states where we can eat a monstrous genetically modified turkey the way the Founders intended, we are now at three weeks since the election. Despite endless promises of stunning new evidence that will overturn the media declared “win” by Joe Biden, it hasn’t happened and shows no sign of happening. Simple requests for some evidence, even from friendly outlets like Tucker Carlson, have been met with angry denunciations from the Trump team but no proof. Sure there is anecdotal evidence out the wazoo and a ton of statistical improbabilities and sure it is hard to imagine that a man who couldn’t get two dozen people to show up to his rallies somehow beat a guy who could pack tens of thousands of people into arenas in the middle of a “pandemic”. But proving that voter fraud happened in sufficient numbers to flip the election is a much harder nut to crack.
That is not to say that Biden “won” legitimately or that there wasn’t rampant fraud. He didn’t and there was. For the couple of months when They let him pretend to be President, I will continue to refer to him as former Vice-President Joe Biden. Just like sensible people know that O.J. killed Nicole Brown even if they can’t prove it in a court of law, sensible people know that the entire 2020 election was a fraud. It almost certainly isn’t going to matter and even Trust The Plan people are starting to admit it. The last resort would be the Supreme Court and even if there was a lot of evidence presented, I can’t imagine the SCOTUS declaring Trump the victor, knowing that it would lead to widespread violence across the country. It might be the right thing to do but that doesn’t mean it is what they will do.
I don’t know if Trump, who gives Obama a run for his money when it comes to narcissism, really believes the courts are going to give him the win or if this has all been for show but he has to realize at this point that the game is over.
There is just too much institutional pressure, even within much of the GOP, to declare Biden the “winner” and move past the Orange Mad Bad era of uncertainty. The Dow Jones Industrial Average hit 30,000 yesterday for the first time on news of a coronavirus “vaccine” and the prospect of a Biden administration. What all of the far left Orange Man Bad people never figured out is that Biden and most of the Democrat party are completely owned by Wall Street. The rich fatcats in America are never going to pay more in taxes, why would they when they control the people who make the tax laws? The Chamber of Commerce is about to get a bunch of new consumers to buy cheap crap and at the same time a lot of illegals and legal immigrants are going to be easier to hire for cheap, further undercutting the wages of heritage Americans. The shredded vestiges of the Republican party are already jockeying for position, like Li’l Marco Rubio talking tough about the Biden cabinet appointments in a bid to be the nominee in 2024. Of course by 2024, even more non-Whites will have turned 18, more older White voters will have died, and millions of illegal mestizos will have become “citizens” and be eligible to vote so the 2024 election is pretty much over before it starts.
Biden might well be the most corrupt person to ever be called “President” in American history but that is a big selling point for the Powers That Be because he will also be the easiest to control. The guy is lost and befuddled on a good day and he doesn’t have many good days. Let Joe sit at a desk he thinks is in the Oval Office and keep him supplied with pudding and he will sign whatever you put in front of him. He is the perfect puppet and when he inevitably dies and is replaced with Kamala Harris, she will be just as easy to control. She is so desperate for power that she spread her legs for 60 year old Willie Brown and now that she is older, there isn’t anything you can imagine she wouldn’t do if it meant more power.
This is coming whether it is right or not. We have 76 days starting tomorrow before Dementia Joe is sworn into the office others stole for him. Ammo, “high capacity” magazines and any firearm deemed naughty by the Left should be high on your shopping list. That especially means AR/AK pistols with braces, those will likely be the first to go via executive order and bureaucratic fiat from the ATF with the Biden* administration’s blessing and encouragement. Do with that information what you will. As I have said, expect some false flag mass shootings very soon. I have been saying you shouldn’t dawdle and now it is crunch time.
The Kraken isn’t coming to save you.