The Mask Is Completely Off

With the election tomorrow, it is pretty much a done deal. People who are waiting to vote on election day, like my family, are going no matter what and nothing would change our vote at this time. I would crawl over broken glass to cast my vote and millions of other people are the same.
Over 60 million people have already voted, or about the same number of people in total who voted for each of the major party candidates in 2016. I assume a majority are Biden voters. This early voting is not an organic response to the Chinese coronavirus, it serves a different purpose: getting people to vote early, muddying the vote counting process and giving the electorate less time to consider things that pop up late, like Joe Biden's crackhead kid selling access to the Obama administration, enriching himself so he can pay for hookers and blow, as well as lining his dad's pockets.
Now that we are right on top of the election, we are seeing the mask come off and the real agenda being exposed. Kamala Harris posted this video on her official Twitter last night and it is hard to argue that this is anything other than Marxism.
(In case they delete this video or nuke my account, I also uploaded it to Bitchute here)
We have come a long way baby.
Once upon a time, we were told that we need things like affirmative action to help give people a leg up. That was bullshit but it was what we were told. The video sort of starts out that way but the key phrase comes at the end..... 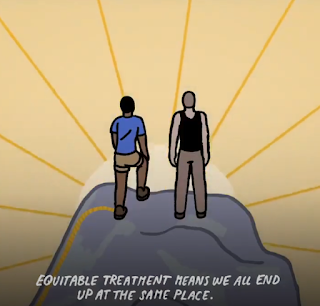 We all end up at the same place.
The same place.
I guess that it is not equitable that I wasn't born to be 6' 9" tall and therefore I never got a chance to be a power forward in the NBA. So the equitable thing would be to sign me to a contract like LeBron. I will wait for the Lakers to call me.
If the only "equitable treatment" is for us all to end up at the same place, then it follows that the opposite is true: if anyone doesn't end up at the same place, it is inherently inequitable.
Natural talent doesn't matter. Hard work doesn't matter. We all end up at the same place.
That sounds all kinds of swell but we have seen what this looks like in practice. It isn't everyone standing on the mountaintop as the sun rises, it is all of us in the valley. Marxism in practice doesn't raise everyone up to the same level, it crushes everyone down to the same level. The little people aren't on the mountaintop watching the sun rise, they are in the valley where the sun never reaches.
Not people like Kamala though. People like her will make up the tiny fraction of aristocrats, living like royalty under a different set of rules, who will ensure "equity" by crushing down anyone who tries to get a step up. Stick out just a little and the hammer will come down. After enough people get hammered back down, most of us will start to learn and stop trying to do anything but keep our heads down and survive.
That is what they want. People in terror who never think of anything other than staying alive until tomorrow. People crushed down by the government, and so dependent on the state that crossing their rulers is a death sentence. The constant threat of boxcars and gulags and re-education camps.
We don't have to guess how this works out. We have seen it over and over, during the course of the 20th century, and everywhere it has been implemented it has created intentional human suffering on an industrial scale never before seen. In the past, most human suffering was due to general negligence and nature but under Communism it was intentional which made it that much worse.
There has never been an election in my lifetime where outright Marxism was represented by one of the major tickets but here it is, unapologetic and bold. A United States under the thrall of Marxism would remove the only barrier to worldwide darkness that mankind might never recover from.
This is what is at stake tomorrow. No pressure.
Posted by Arthur Sido at 11:01 AM