The Lügenpresse Is Also The Blödpresse

One of the dirty secrets of the media is that, generally speaking, people who majored in journalism are some of the dumbest people in a given college with some of the lowest standardized test scores. Some of them are reasonably clever or have an onscreen personality that works, but they are dumb. Brian Stelter? Jake Tapper? Complete dumb-asses and when you get into some of the more rabid far left sources like MSNBC?
Now you are getting bottom of the barrel imbeciles.
Case in point: Joy Reid, a primetime host of MSNBC with 1.8 million Twitter followers, said this 10 hours ago and it is still up. 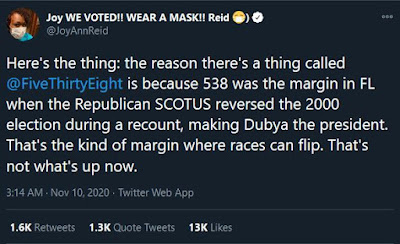 The stupid, it burns.
If you were some schlepp off the street, I could forgive you not knowing that FiveThirtyEight.com is called that because 538 is the number of electors in the Electoral College. That is why the magic number is 270 to win the presidency. 538 divided by 2 is 269, so 270 gives you the majority.
But a prime time host on MSNBC paid to provide political commentary? Come on.
Oh, did I mention that Joy Reid has a degree from Harvard? If you still are impressed by Ivy League diplomas, please stop. Now.
Also worth noting, Bush was always ahead in Florida which is why Gore called to concede before he called to un-concede. 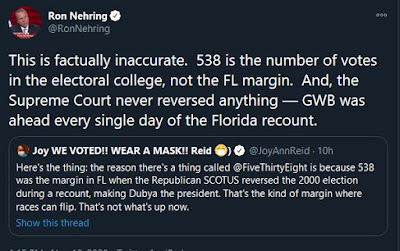 Joy Reid is completely insane coupled with being mind-numbingly stupid with a heaping helping of undeserved self-confidence. That is a dangerous combination. What makes it more dangerous is that apparently millions of people think she is a serious thinker.
We need to split this country up before these imbeciles drag us into a civil war.
Posted by Arthur Sido at 9:20 AM