The False Flags Are Starting Early

I predicted that as we entered the new year we would see false flag mass shootings involving White men, who are rarely the shooters in mass shootings, and assault rifles, which are almost never actually used in mass shootings, to drum up support for massive gun control legislation. Really, I expected it to kick off shortly after inauguration but this incident screams false flag...
Wauwatosa police 'working tirelessly' to ID, arrest suspect in Mayfair mall shooting
Malls are full of cameras, witnesses and people with camera phones. No video evidence has been forthcoming from the Friday shooting and it is Sunday. Eight people were wounded in the shooting. The media is reporting a very vague description:
Witnesses described the shooter as a white male in his 20s or 30s, Wauwatosa Police Chief Barry Weber said Friday.
Police are also saying this was not a random shooting:
On Friday, police said they "believe that this shooting was not a random act, and was the result of an altercation."
Curious that no one caught the shooter or the "altercation" on camera when people whip out their cameras at every opportunity.
The "White male aged 20-30 with an assault rifle" is the unicorn the Left is always begging for and at least one "terrorism analyst" named Rita Katz tweeted out a picture of the "gunman" that she also apparently didn't have permission to use.
Except it wasn't the shooter at all, it was a cop clearly wearing a uniform and with his badge prominently displayed... 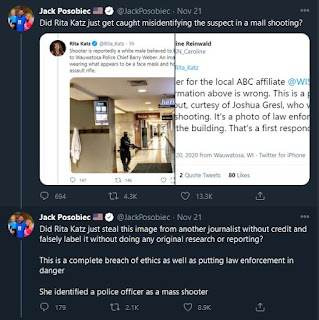 It might be worth your time to check out the "Early Life" wikipedia section for Rita Katz...
Anyway, she seemed awfully eager to pin this on a White guy. We will see what comes of this, in a world of everyone masked up, identifying people is going to be much harder.
Keep watch, this is just the beginning and in spite of 575 mass shootings in the U.S. and counting that have received almost no attention, there will be more next year and the "shooter" will be White men and you can bet those shootings, false flags or not, will get a lot more attention.
If you are the kind of person who reads this sort of blog, you are Public Enemy Number One even though you are also the kind of person who keeps society running. Watch your back and don't let yourself be put in a position where you can get used as a patsy for the Left.
Posted by Arthur Sido at 12:52 PM