Quite An Inspiring Message For Little Girls

While the election is far from over, the media is spending their time 24-7 gushing over the ticket they are trying to force into the White House through gaslightign and chicanery. Did you know Biden has a shelter dog, it will be the first rescue dog in the White House! Squeeeeee! Kamala will be the first female Vice-President! What an accomplishment, what a role model for women! Squeeeeee!
Kamala is loving this and is really playing up the "when I was a little girl" crap, just like Hillary. She tweeted this out: 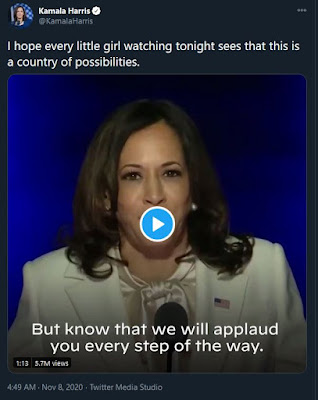 Apparently America isn't a country of possibilities for little boys, even though they lag behind girls in most meaningful measures. I wonder what happens when little boys grow up into young men who don't have a voice. I am sure that will go great for everyone.
I haven't talked much about Kamala, because she simply isn't very interesting and isn't really deserving of serious thought but her hokie crap about what her being potentially the first woman VP means to little girls is just revolting.
Is there a worse role model possible for little girls?
Kamala Harris whored herself out to a 60 year old married man when she was 29 or 30. How icky is that, how cliche, the young woman trading sex with a powerful man to advance her career. After he used and discarded her, Willie Brown at least had the decency to get her some cushy gigs and a step up into the world of California politics where she proceeded to suck at everything she did (pun intended).
In spite of a record lacking any significant achievement, she decided to run for President based solely on her genitals and race. She was a huge flop, highlighted by getting owned by Tulsi Gabbard in the debates.
Then having been unable to attain the nomination herself, she latches herself on to a different creepy old man, the political equivalent of a sugar daddy, and now she is just waiting for him to die or be removed from office. I hope she didn't have to get down on her knees to get the nod as his running mate, especially since I am sure Biden didn't pick her.
That is how we get our first woman President? A woman who achieved nothing on her own and instead rode the coattails, or rode something else, of much older men to get where she is? A woman who embodies all of the worst stereotypes of how women get into power?
I can't think of a worse example for little girls than Kamala Harris. What is a young woman supposed to take away from Kamala becoming VP? If you want to be successful, don't work at it yourself, just spread your legs for older, powerful men and they will propel you to prosperity?
While I remain cautiously hopeful that Kamala and Biden will be stopped in their attempted coup, even if they are somehow installed into office by the media their administration will never be valid to 70+ million Americans. Perhaps some day we will finally see a woman become President by virtue of their own achievement, rather than as a result of their willingness to trade sex for power. But it won't be Kamala Harris.
Posted by Arthur Sido at 12:14 PM