It was a busy Thanksgiving weekend so I didn't get any blogging done, which isn't a bad thing. More election nonsense isn't all that interesting to me and I don't feel like writing about it. But this came to my attention and I had to bring it to yours. 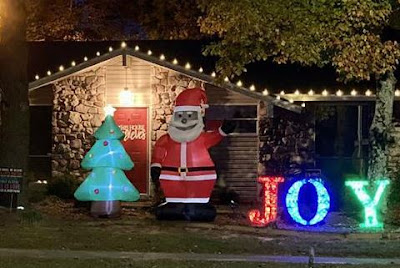 Man receives racist note after putting up Black Santa decoration
Not allegedly receives. They just assume this is true.
Even after Jussie Smollett. Althea Bernstein. Bubba Wallace. One fake "hate crime" after another.
The letter he received in the mail, like that is what someone would do, reads:
"Please remove your negro Santa Clause yard decoration. You should not try to deceive children into believing that I am a negro," the letter said, according to THV11. "I am a Caucasian white man to you and have been for the past 600 years. Your being jealous of my race is no excuse for your dishonesty."
"Besides that, you are making yourself the laughing stock of the neighborhood," it continued.
As an expert in how White people talk, being the Whitest dude around, that doesn't sound like something any White person would write. What it does sound like is what a black person thinks that White people would sound like. Sort of like when Mike Tyson tries to sound smarter than he is by using big words he heard his White handlers using.
CNN reported that the man attacked by this terrible hate crime, Chris Kennedy, read the note aloud on Facebook live. That doesn't seem like it was staged or anything. Oh, and his homeowner's association gave him a free membership for a year.
At least they are wising up a little, by mailing the letter there is no chance of any inconvenient videos showing Chris Kennedy leaving the note on his own property.
On and on the drumbeat of fake "hate crimes" goes, setting the stage for what promises to be an enormous transfer of wealth earned by Whites and given to blacks as compensation for things that didn't happen to those blacks in the first place.
Posted by Arthur Sido at 7:11 PM