One of the weird phenomenon of life in the 2020s so far is that while we have a whole lot of murders in America, the ratio of shootings to killings is pretty low. For example, in Chicago this year:
If I am doing the math correctly, and it is likely I am not, that works out to just over 17% of people people shot dying from the attack. Better than four out of five people shot in Chicago survive. With modern firearms and ammunition, that seems pretty poor. I have never had to shoot anyone yet but if I did I am pretty sure I would finish the job. So what seems to be the problem? I found some video evidence that might shed some light on the question.
Watch the video of these commandos in action!

It is like watching special forces operating or something!
The cool thing about shooting in the 'hood, when you squeeze off a few from a firearm it is absolutely certain that the rounds just dissolve in the air after 5 feet, and don't come down into houses or people. Out here in the country our bullets will travel hundreds of feet and we learn about concepts like gravity and "what goes up, must come down". That is why our father's taught us things like being sure of what was beyond our target.
Really, what is the point of shooting like this? 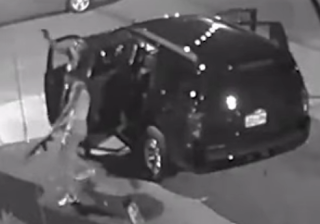 I have been shooting since I was old enough to shoot a gun and I couldn't hit a man sized target ten feet away holding the gun over my head like that.
My solution to the gun violence problem is this:
1. Mandatory basic firearms training in our inner cities.
2. A couple of weeks where the cops stay home and EMTs are on vacation.
3. At the beginning of those couple of weeks, hand out simple firearms and plenty of ammo in our diverse neighborhoods.
4. After those two weeks are over, collect the guns and go back to normal. The gun violence problem in America will have mostly solved itself. At least until the next generation gets old enough to start shooting each other.
Making it harder for White people to buy guns? Yeah, that isn't going to help but my solution would mean a more peaceful 2021.
Maybe I should run in 2024 on the "Purge Platform"?
Posted by Arthur Sido at 8:44 AM