Never Cuck To Commies. Ever.

As 2020 drags on toward a Thanksgiving where only the powerful and privileged can be allowed to dine together there are lots of lessons we have learned but one that seems to have been missed is that you never, ever, EVER bow to the Communists. They only see it as one thing: a sign of weakness that encourages them.
Enter the polarizing figure of Kyle Rittenhouse. Kyle is a 17 year old who was in Kenosha, Wisconsin helping people and protecting businesses from being burned by Marxist agitators who were allegedly upset at the police shooting of black rapist. I wrote about this multiple times, see The Fuse Is Lit. You can tell where someone is on the spectrum based on their view of Kyle. People on the Left think he is a "White supremacist domestic terrorist" who was looking for innocent people (three criminals including a pedophile in this case) to gun down and he crossed a border to do it (when White people cross a state border, that is bad. When mestizos cross the U.S. border illegally, that is good). People on the Right think he is a decent kid trying to help who was attacked and defended himself, justifiably killing two adult men attacking him and blowing a chunk out of the arm of another. Some of us laud him as a hero for taking out three Commies.
Anyway, that was August and just last week Kyle made bail, of almost $2 million for a 17 year old who isn't a flight risk. Lawyer Lin Wood tweeted out this picture: 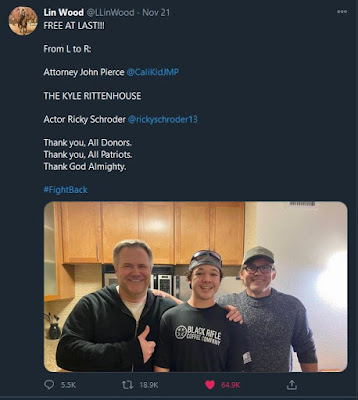 Millions of us were glad Kyle was out of jail and we also noticed that he was wearing a Black Rifle Coffee Company t-shirt. I own several of their shirts because I like the shirts and I like their coffee. Black Rifle Coffee Company doesn't sponsor me or know who I am. But Kyle is a villain in the Marxist kabuki theater so even if you don't say anything in support him, just him wearing your t-shirt brings out the freaks and faggots of antifa on Twitter. They shit up the twitter feed for BRCC and at about the same time, BRCC issued an official statement with CEO Evan Hafer's name accompanying the statement.
You can read their whole statement here but this is the important part, particularly the middle paragraph.
The Black Rifle brand is a symbol of service, of strength, and of goodness that has carried over from our military origins. It’s why we support active duty service members and veterans, prioritize veteran hiring, and advocate for individual liberty and personal responsibility.
We do not support legal advocacy efforts. We do not sponsor nor do we have a relationship with the 17-year-old facing charges in Kenosha, WI.
We believe in the integrity of the legal justice system, and support law enforcement officials.
Nothing wrong with that as such and it is factually true but what is wrong with it is what it doesn't say. They don't mention the name of Kyle Rittenhouse, calling him "the 17-year-old facing charges" and generally just dance around with what sounds like something written by lawyers and P.R. people. More important, there is no mention of the fact that Kyle was aiding local businesses, that he was being attacked by Marxists with criminal records and defended himself with, of all things, a "black rifle" and that for the community served by BRCC, the right to self-defense is a foundation of our American freedoms and one of the bedrocks of the 2nd Amendment. Kyle is the sort of person who drinks Black Rifle Coffee but CEO Evan Hafer, faced with the bane of Big Corporate, bad publicity, blinked.
He blinked and he cucked to people who hate him for what he is (a White pro-2A veteran) and wouldn't buy his coffee anyway. He also pretty much told the 2A community who buys his products that he was more concerned with publicity than standing up to the Marxist mob. His big mistake was trying to thread the needle, disavow Kyle without naming him while trying to sound like he still all about things like "individual liberty and personal responsibility". What about Kyle's liberty and the personal responsibility of the commies attacking him. Evan is a vet and should know that doing things half-assed is a great way to get killed.
Meanwhile, the name of a new coffee company kept popping up on Twitter, Stocking Mill Coffee. I checked out their Twitter feed and saw this: 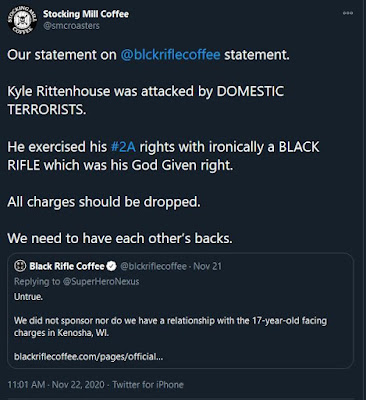 That is what a "No Effs Given, We Don't Bow To Commies" company says about this whole thing. Click the link above, their website needs some work but I love their spirit. 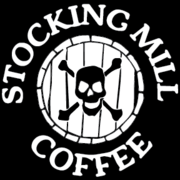 I won't do anything so childish as to video myself throwing my last bag of Black Rifle Coffee in the trash or burning my several Black Rifle Coffee Company t-shirts. I first had their coffee at the NRA annual meeting in 2019 and loved it, so I have bought a bunch in the last year and a half, both to drink and to give as gifts. I wear their t-shirts because they are cool and I like their product. Unfortunately they seem to have grown too large (over $80 million in annual sales and climbing) and are now protective of their brand more than supportive of their community. I was actually planning on buying more BRCC coffee this weekend but after that I changed my mind and instead ordered a couple of bags from Stocking Mill.... 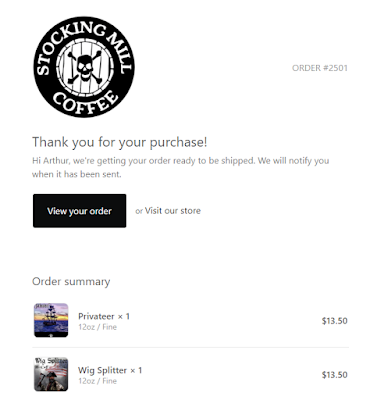 Not only that but I ordered their "fine" ground and they texted me an hour later, on a Sunday morning, to ask if I meant to order that as their drip grind works better for drip machines, so I asked if they could change it and they did. Again, they texted me to ask if I ordered the right thing on a Sunday morning.
Black Rifle Coffee Company is learning the hard way, cucking to the commie crowd is never a good idea. You can't try to sit on the fence in 2020 and beyond. This is a day and age for picking a side and the middle of the road isn't a side you want to be on when shit hits the fan.
Posted by Arthur Sido at 7:10 PM