A quick follow-up to my post about Black Rifle Coffee Company, Never Cuck To Commies. It is starting to appear that not only did BRCC cuck to the Left, at least at the highest levels of the company they aren't what they seem to be at all.
Yeah, it is just coffee. Who gives a shit, right?
The issue I have is when an individual or organization portrays themselves publicly as one thing to gain our trust, and more importantly our money, but when pushed they show themselves to lack principles and flip on a dime.
What is worse is when that same individual or group turns out to have been a phony all along.
As bad as the Left is, at least we know they are the enemy but when someone or something we thought was on "our side" turns out to be working at odds with us? That is far more insidious and dangerous enemy and we see it all the time. The most obvious example are the NeverTrump neocons that have been suckering Republican voters for decades by dangling things important to us as bait while never intending to do anything about it. False allies, controlled oppositions and grifters are all over the Right, from Ben Shapiro to Bill Kristol to many of the former "leaders" of the alt-right, and it is important to call them out and remind ourselves that not everyone saying they are on "our side" are actually /ourguys/.
After the initial clumsy press release and then a super cringe follow-up video from Evan Hafer, rumors started flying that the founder of BRCC had donated to anti-gun politicians. See this video for example:
I am not someone who believes everything they see on a screen so I went to the direct link and took this screenshot myself. Click picture to enlage.

Apparently Evan Hafer donated to not only Tulsi Gabbard, who is kinda cute but also anti-gun, but also to Barack Obama, the most stridently anti-American President in our history, at least until Biden dies and Kamala Harris takes the office. According to Gabbard's own campaign website (screenshot from 11/24/2020)... 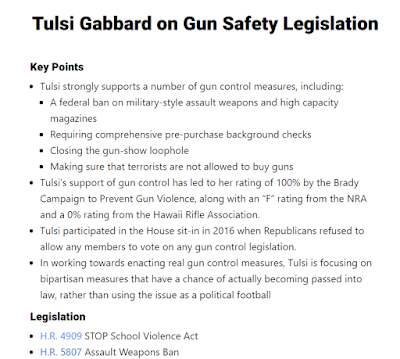 Gabbard pledged to ban "assault weapons" which are what are commonly known in our circles as "black rifles". It might be just generic support for these measures necessary to get in the door of Democrat political circles but her support is right on her campaign website.
The founder of Black Rifle Coffee Company gave money in November of last year to a politician who wants to ban.....black rifles. BRCC is all over the gun industry and they are buddies with all the gun-tube guys who make videos about firearms that people like me watch. They are also, at the highest levels anyway, working at odds with us. Sure it isn't a lot of money, $500 to Tulsi and $500 to Obama but it is still a poke in the eye.
For a business taking about honor and loyalty and all the buzzwords, a company that makes money selling to patriots and gun owners, to be headed by someone giving money to people working to strip away our freedoms is revolting. It is fake and dishonest and I hate people who are fake.
This matters because it is a lesson we need to learn.
Just because someone selling a product says they are pro-military and pro-veteran doesn't mean someone is pro-America or pro-2nd Amendment
Many, MANY veterans (and LEOs) are very pro 2nd Amendment. Lots of vets are very active in the various patriot movements and 2nd Amendment advocacy groups. The same is true of a lot of cops. I have my criticism of some areas of law enforcement, especially at the Federal level, and I don't like the militarization of the police but the average cop is a decent guy with a family, and many are gun owners outside of work and support the right of American citizens to keep and bear arms. I would go so far as to say that a significant percentage, likely a strong majority among White cops and vets/active duty, are /ourguys/ on most questions. Sure there are cops who are assholes, who joined the force because they thought it would give them license to hurt people and get away with it or they are just jerks who like the ability to order people around but most local cops are OK.
That doesn't mean being a cop or being pro-cop gives you a blank check for everything else you say and do.
I back the blue when the blue backs me and my people and when they obey the Constitution. When the blue violates the Constitution? They are no different from anyone else in a position of authority that abuses it.
The same for vets. I can appreciate vets for their service but serving in the military, no matter how honorably or bravely, doesn't give you a pass for what else you do. I don't think someone being a Navy SEAL gives them special authority on topics other than SEAL specific stuff. John McCain served the U.S. and he was a warmongering piece of shit and an all around terrible human being. At the upper echelons, the military seems full of pretty awful people while the lower ranks are like the rest of the country, mostly average people with a percentage of extraordinary human beings and a not insignificant percentage of awful people. There is a reason the military has their own police force, justice system and penal facilities.
There are plenty of grifters and fakes wrapping themselves in the flag because they know it will help them sell their products. I am not saying that Evan Hafer is a grifter but you have to question when someone sells products with the phrase "Black Rifle" and all of their promotional material is full of black rifles but he gives money to politicians who want to ban his customers from actually owning those rifles.
Thanks for your service Evan but I'll get my coffee somewhere else.
Posted by Arthur Sido at 9:10 AM