The media is in full gaslighting mode. After the coordinated Saturday at noon announcement of Biden "winning", while half a dozen states are super close, having recounts, dealing with questions of fraud and lawsuit, the media is now repeating over and over that Biden won the election. Worth contemplating, if the situation were reversed and Trump was apparently getting truckloads of votes in the middle of the night and those "votes" were the margin of victory, you can be damn sure the media would be ominously talking about White supremacists "stealing the election".
But on Sunday the media is full of sunshine and puppies celebrating Biden's "win". Any mention on social media suggesting that there are questions outstanding about the election are accompanied by dire warnings.
Many of Trump's tweets are flagged with a warning that what he is saying is in dispute.... 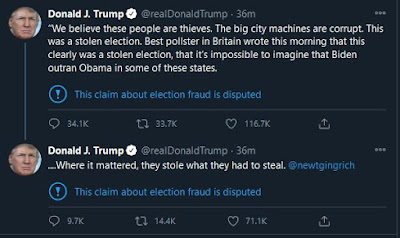 The message is obvious: You can't trust what Trump is saying. But Biden? 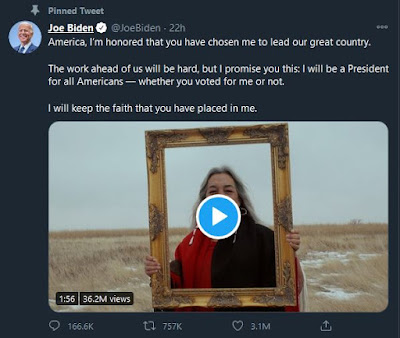 He can change his profile to say he is the President-elect, have a new transition team Twitter account and talk about being the new President, while the election is still under dispute, and that is apparently fine. Bias? What bias? It isn't just Trump, I was watching a Styxhexenhammer video this morning and because he is talking about the election, he gets this warning on his video....

Then Facebook is slipping this into the middle of your news feed. 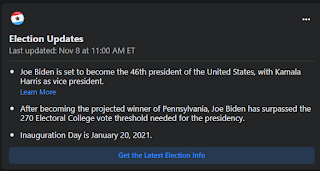 How very Orwellian. Just keep sticking the same partisan message into people's news feed so they see it over and over again. Sadly they are probably right and it will work.

This is all coordinated by the same people who claimed that Russian trolls interfered in the U.S. election and flipped the result to Trump.
Meanwhile the dementia-addled "President-elect" is putting out statements, keeping in mind that Joe hasn't composed a single tweet since the campaign started. Joe Biden's public statements are all about "healing" and "unity" but his supporters are telling the real story.
Brain-eateing "journalist" Reza Aslan thinks that we need to "excise" anyone who voted for Trump from "our" society (as an aside, America isn't his society and wasn't built by people named Reza) 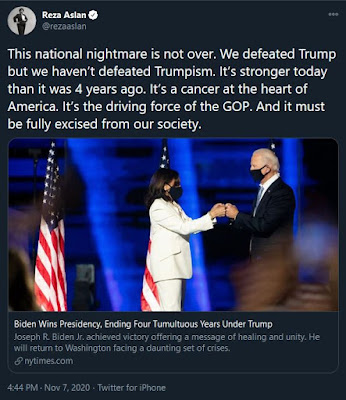 This is the same Reza who said "we" would burn the entire fucking thing down if "they" even TRIED to replace RBG. Meanwhile Ginsburg is rotting in the ground and Amy Coney Barrett is on the Supreme Court.

Not sure what the "thing" was that he was going to burn down but I am pretty sure whatever it was is still standing. Same guy.... 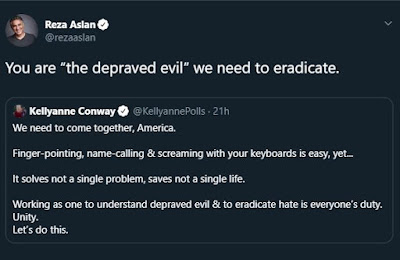 Eradicate sounds an awful lot like exterminate. This guy is unhinged and no one really takes him seriously. Speaking of no one taking you seriously, we have Jennifer Rubin.
First she said this.....

We have a list!
She seems to think that we all deep down want to be part of the "polite" society that she feels qualified to dictate to the rest of us. Sorry Jen, I don't have any interest in being in the same country as you, much less part of your virtue signaling cocktail parties. Then on some talk show JenJen was talking about burning down the Republican party so there are no "survivors".

“It’s not only that @realDonaldTrump has to lose, his enablers have to lose. We have to collectively burn down the Republican Party. We have to level them. Because if there are survivors....they will do it again.” Jennifer Rubinpic.twitter.com/Y4FDIgKFDt

A final solution perhaps? You would think Ms. Rubin as a Jew would be cautious about such statements but you would be wrong. At least she no longer calls herself a conservative commentator.
The audacity here is sweeping. From her lofty perch on the East Coast, Ms. Rubin is declaring jihad on half of the country. Good thing no one really pays any attention to her. Moving on....

Wegman is on the editorial board of the New York Times. Think about what he is saying. We should only have one political party, liberal Democrats and really liberal Democrats. The people he says should be sidelined from national governance represents over 70 million people who voted for Trump. 70 million is a higher vote total than Obama received in either election and higher than Hillary Clinton in 2016. No one has ever received 70 million votes before. Trump did and of course Biden got even more, assuming all of those votes are legitimate.
Nevertheless, a member of the New York Times editorial board thinks that those 70,000,000 Americans should have no significant role in national governance. I wonder if he has thought this through because if 70 million Americans are to be cast out of national governance, but not paying the taxes that go to keeping that national government running, then they are sort of in a corner. This might be a good time to remind us all of an old saying, war is politics by other means or the more exact quote from Carl von Clausewitz in his famous work On War.
We see, therefore, that War is not merely a political act, but also a real political instrument, a continuation of political commerce, a carrying out of the same by other means.
In 2021, we might see war becoming a means of advancing policy and politics itself when the established method of enacting policy, free and fair elections, is proven to be no longer viable. The disenfranchisement of 70 million people, who own the bulk of the 400 million guns in this country, might seem smart in a policy session in some conference room in D.C. but in practical matters maybe not so much.
It is not just hack journalists making these wild statement. A fairly shadowy group in D.C. calling itself the "Trump Accountability Project" is threatening to destroy anyone who worked for Trump.
"Trump Accountability Project" vows to document Trump supporters for future repercussions
This comes after bimbo former tavern wench Alexandria Ocasio-Cortez took to Twitter to declare the need to create an enemies list of her own...

She has a number of replies from various Left-wing loons who confirm that there are a lot of lists being compiled.
Enemies lists. Show trials. Talk of eradication and "survivors".
Biden talks a big show about "unity" and "healing" but his supporters seem more interested in political retaliation, suppression and vengeance. More evidence that even if Biden is sworn in as President, he will never be the one in charge.
Posted by Arthur Sido at 5:47 PM