The news from Chicago continues to be grim.
In 2019, Chicago had a huge number of murders with 340 people killed in Chicago. That is near enough to say basically one murder per day in 2019. That is awful and speaks volumes about the problem of violent crime in our diverse urban settings.
Then 2020 happened.
The Chicago Sun-Times has a running tally of murders in Chicago. As of last night, the total was....
613
A different website I just came across thanks to Donut Operator called Hey Jackass!  has the tally at 626, not sure where the disparity comes from but they also list the total number of people shot so far in 2020 as 3,357.
Here is the map of murders as they track them.... 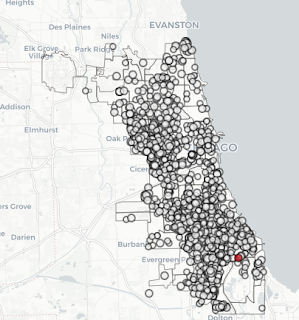 While it feels like 2020 has lasted 33 years, yesterday was the 286th day of the year. That means by my reckoning that there have been 2.14 murders per day so far in Chicago. Put another way that means there is a murder about once every 11 hours in Chicago and even more startling, when you just look at shootings the number is incredible. From Hey Jackass! (HJ from here on)... 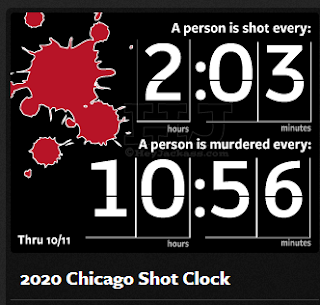 Someone is shot once every other hour in Chicago. Who are these gunshot victims? HJ has an answer to that as well: 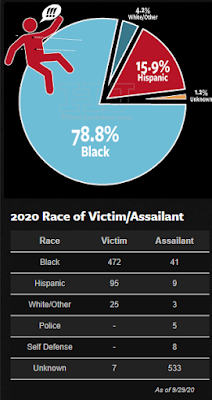 The low number of identified assailants isn't surprising but with 53 identified by race (police and self-defense shootings not included) and 533 not, that isn't a great ratio. Thanks to the citizens of Chicago for helping the cops solve murders in their own damn community! Nothing says black Lives Matter quite like refusing to help prosecute people who are actually shooting and killing black people!
One should also note that the city of Chicago is home to over 2.6 million people and the three major races are pretty evenly represented (as of 2010)

Let's do a little math. White people are about 1/3 of the population, blacks are about 1/3 and mestizos of various sort are slightly less than 1/3. When it comes to murder victims though? Of the 599 people identified by race (this is slightly out of date, HJ has it as of 9/29/20), 472 are black. That means that black folk make up almost a whopping 80% of racially identified murder victims. Mestizos are about 16%, significantly less than their population as a whole and Whites (including "others") are only about 4% of the population, compared to be 31.7% of the population of Chicago.
So who is doing the shooting? We know the answer but let's do the math anyway.
In the 53 cases where the race of the accused shooter is known, 41 are black or about 77% which is way more than double their percentage of the population. Mestizos come in with 9, about 17% and Whites/other come in with 3, or about 5.6%..
Since we know that most murder is intraracial and blacks are drastically over-represented in interracial violent crime, it is safe to assume that virtually all of the 533 unknown shooters are black. That is not "racist", it is basic deduction based on the available evidence.
Why is this not bigger news?
As I have been pointing out for much of the year, murder concentrated in the black community is skyrocketing all over the country. Not just in huge cities like Chicago but also locally in Indiana:
Indianapolis sets homicide record
Indianapolis has recorded at least 160 criminal homicides in 2020, surpassing its highest ever tally for a whole year, according to the Indianapolis Metropolitan Police Department.
From Friday night to Sunday night in the city, seven people were slain in four separate shootings, one was stabbed to death and one died in an apparent inmate-on-inmate assault inside the Marion County Jail, the Indianapolis Star reported.
IMPD investigated 154 criminal homicide cases in all of 2019 and 159 a year earlier – the city's previous record high.
City after city in America is seeing near or above record levels of homicide and we still have 2 1/2 months to go in 2020.
I keep banging the drum about this as a response to the endless fear mongering about the phantom menace of "White supremacist terrorism". As a reminder, there is no place safer for a black person in America than an all White neighborhood and the only real threat most blacks face in 2020 is not from cops or Whites, it is from their fellow blacks.
Too bad we don't have an actual media in America interested in something other than defeating Orange Man Bad, maybe we would get some coverage on issues like this that really matter.
Posted by Arthur Sido at 10:37 AM