wHy dOn'T tHeY jUsT tASeR hIm?

Whenever cops shoot a black man, no matter the circumstances, the second guessing starts and the media breathlessly reports whatever his family says while the police typically don't say much initially. It makes sense legally but it leaves the narrative completely in the hands of the media, which loves to create crises wherever they can, and this has lead to cops getting shot. The media wonder why they are called by so many "The enemy of the people"? Maybe because they have blood on their hands.
Anyway, when a cop shoots a black man, no matter what the black man is doing at the time, the responses, usually from college aged upper middle class White girls or middle aged White women slurping down a box of wine goes something like this...
- Why didn't they taser him?
- Why did they have to shoot him so many times?
- They are cops and get paid to do this, they should have wrestled the knife away!
- Why didn't they shoot him in the leg/arm/hand/shot the knife out of his hand?
- White supremacy!
- ACAB!
These comments invariably come from people who have zero experience in going hand to hand with someone who doesn't want to cooperate. The answer to those questions is pretty simple: in a tense, violent situation you have to make a split second decision and the wrong decision can lead to a cop not going home at the end of their shift.
That brings me to Shaon Jermy Ochea Warner. Mr. Warner was a 34 year old black man. Mr. Warner was also enormous, like close to NFL lineman enormous. Cops were called to a report of a stabbing and found Mr. Warner lurking near a bush in the dark. Here is what followed:
The guy shook off a taser and instead of doing the smart thing and dropping the huge knife and putting his hands up, he decided to head straight at a female cop, stab her and grab her gun arm. As a reward, he got 21 rounds dumped into him.
I loved this comment from "Edwin B":
CNN: revered community leader and father of 9, ruthlessly shot down by white police officers while gardening at night.  Victims mother said he was a good boy.  Insert picture of elementary school graduation here.
That is Babylon Bee level stuff right there.
Notice that he changes direction and heads for....the female officer. Why? Because even to an imbecile like "Shaon" it is obvious she is the easier target, smaller and weaker than her male counterparts. We really need to rethink putting female cops into these sorts of roles where they can encounter men who are much bigger and stronger. There are lots of roles women can fill as police officers but this isn't one of them.
Anyway, dumb criminal does something dumb and potentially dangerous, get dead for his trouble.
What is most disturbing about this video is not the guy getting shot. It is a safe bet the world is better off without Shaon Jermy Ochea Warner in it. No, what you see on display throughout this video and let me say it nice and loud for the people in the back was this:
The officers hesitated to shoot an armed black man charging a cop with a knife in his hand because they don't want to be the next cops put on trial for murder for doing their jobs and it almost cost that female cop her life.
If Shaon had an IQ above 70 and wasn't high or whatever the hell was wrong with him, he would have known she was wearing a protective vest and instead of stabbing her in the torso would have stabbed her in the neck or face, potentially maiming her for life or even killing her. They should have shot him right here: 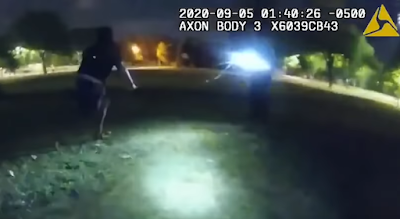 As soon as it was clear he was shaking off the taser, was still armed and charging the female cop, they should have dropped him. I am not sure why she didn't drop her taser and pull her sidearm. She kind of panics, starts screaming and backs away and in doing so she became a huge liability because her partners couldn't safely shoot because she froze up. Again, we need to rethink what role women play in law enforcement.
These cops had to be thinking about what happens when they pull that trigger and the protests start and an overzealous DA decides to put them in jail to try to stave off rioting. There weren't riots in this case but there apparently was a small protest at the sight because the prevailing narrative today is:
There is never, ever a valid reason to shoot a black man no matter what he is doing.
Tasers can be effective as a non-lethal deterrent but we often see videos where they don't work. Most people upon getting tased decide they don't want what comes next and give up, but in cases like this, it just makes them mad. You can't wait until Mr. Warner kills or critically wounds one of the cops before you do something but even still the police hesitated and it could have cost the female officer her life.
Being a cop is one of the most dangerous and difficult jobs in America, made harder by people second guessing everything they do to keep us relatively safe in a nation descending into chaos. Are there bad cops? Of course, just as there are bad teachers, bad plumbers and bad clergy. Are some cops assholes because they can get away with it? Sure. The problem is that when you treat every interaction cops have with the population most likely to interact with them, black men, because black men commit more crime than any other demographic group, it makes the occasional and rare instances of actual police misconduct harder to identify.
As always the best way to avoid being shot by cops is to not be a criminal but if you are going to be a criminal, going after a cop with a knife after getting tasered is an almost certain path to getting 21 bullets sent your way at high speed.
Don't be a criminal and you almost certainly won't get shot by cops.
Posted by Arthur Sido at 4:13 PM