Why Democracy Is A Terrible Idea In One Tweet 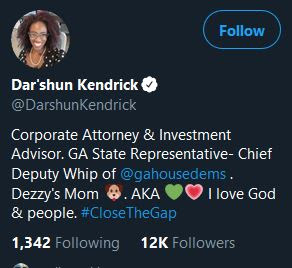 OK, keeping all that in mind, she also tweeted this and despite being scorched for it, has left it up. 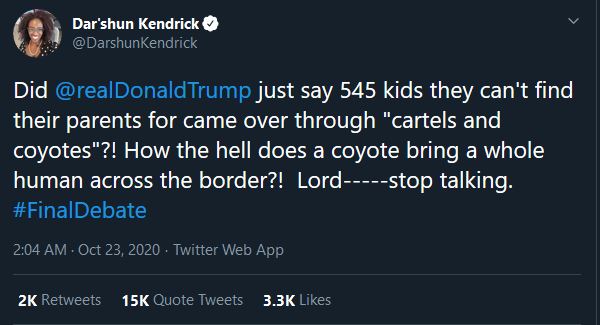 While there might be some people, old people in North Dakota maybe, who don't know what a "coyote" is in the context of illegal aliens, pretty much every functioning adult in America does. But Dar'Shun obviously doesn't. Not only that, but 13 hours later she still has this tweet up in spite of being ratio'd into outer space.

Someone with a 80 plus IQ and a shred of self-awareness would delete a tweet with a ratio like that but I still think she doesn't get why people are mocking her unmercifully.

So here we have someone who is both an imbecile and either so lacking in self-awareness or so full of unwarranted self-confidence (or both) who not only gets to vote but is actually a high ranking elected official in Georgia and likely will one day be in the U.S. Congress. She doesn't understand a common phrase that the President used, is clearly dumb as a bag of hammers and is so caught up in Orange Mad Bad that she doesn't take ten seconds to think before tweeting but sure, let's let her make decisions that impact the lives of people who understand what a "coyote" is.
The 19th Amendment and universal franchise will be the death of the West.
Posted by Arthur Sido at 11:43 AM