Where Did This Guy Go?

A couple of tweets from Trump this week that hearkened back to the guy who ran in 2016.... 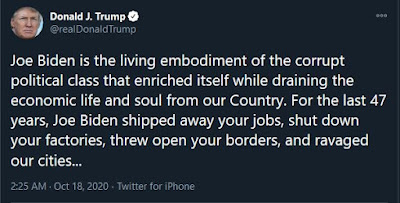 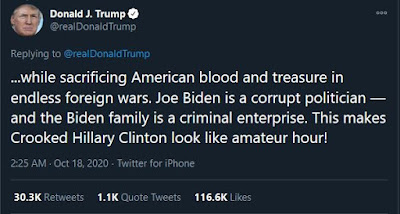 This is the stuff that got him elected, not moving the embassy in Israel to Jerusalem or corporate tax cuts or clemency for black criminals. America First economic populism, foreign non-interventionism, draining the swamp.
That should be Trump's message 24-7. Of course it would help if he had also governed that way the last four years instead of getting terrible advice from his daughter and her ghoulish husband. Still, it is a marked contrast between Trump and Biden, who is promising a return to crappy "free trade" deals, job killing regulations and flooding the country with Mexicans to depress American wages.
It is probably too late but maybe if Trump can stay on message for another week and a half, this will get through to voters in those critical Midwestern battleground states.
If nothing else, it might provide a roadmap for a future economic populist, non-interventionist. Someone like Tulsi Gabbard if she can shed the gun control crap.
There is still plenty of working Americans who want someone who will fight for them. Biden certainly isn't that guy, nor his successor in waiting Kamala Harris.
Posted by Arthur Sido at 6:39 PM