Welcome To Your Future

As the politicized coronavirus response has laid waste to many small businesses, the largest corporations and the wealthiest Americans are raking it in. Look at that chart. Bezos owns Amazon and coincidentally as the virus response kept people out of small stores, Amazon sales were great. Gates and Zukerberg, two tech oligarchs along with Ballmer, Ellison and Page.
Bottom line:
Corporate America is entirely on the side of Big Government on every significant issue: race, immigration, sexual degeneracy, everything but tax policy. There isn't a free market in America, hasn't been for a long time and overwhelmingly Big Business doesn't want free markets. They want markets controlled by their symbiotic partners in government.
That rather overlong introduction brings us to Yelp. Last week the online review company declared that any businesses who were deemed to be possibly "racist" will be branded er made to wear a yellow star er labelled a naughty business on their review. 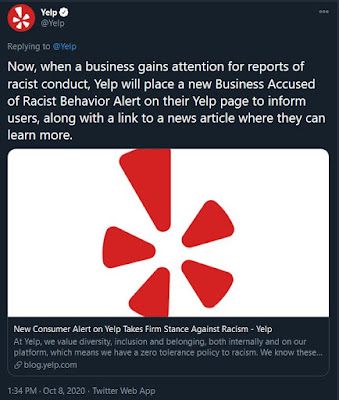 Here is how this apparently works. Some media hacks run a story about a business being "racist". It won't matter how accurate the story is or whether it is politically motivated or not. Just the accusation will be enough to justify being labelled a "Business Accused Of Racist Behavior".
Just get a load of that mealy mouth crap. A business "accused" of "racist behavior"? That is Soviet level discourse. A mere accusation apparently is adequate to get your blacklisted (pun intended) by Yelp and since most normie Whites are terrified that anyone think them racist, you can bet that Whites will be checking Yelp
If you don't think this will be abused by race hustlers, you are an idiot. The Left is already putting together a hit list:
ANTIFA Is Compiling Lists Of "Fascist" Businesses For Yelp's New "Racist Behavior Alerts"
The list is being prepared by the same ANTIFA group is that "responsible for organizing the violent Portland riots," according to the Post Millennial. In fact, Tweets from the group compiling the data suggests that ANTIFA members submit "non-friendly" businesses, "AKA any company that's hanging blue lives garbage in their store or anything else that's anti the BLM movement".
So, in essence, Black Lives Matter is now being granted the power to shut down whatever businesses it doesn't like. And remember, this is supposed to be the anti-fascist group.
You can be sure that race hustlers like Benjamin Crump and Shaun King, along with the OG race grifters like Jesse Jackson and Al Sharpton, will be hitting up businesses for "donations" to avoid getting reported as being "racist". 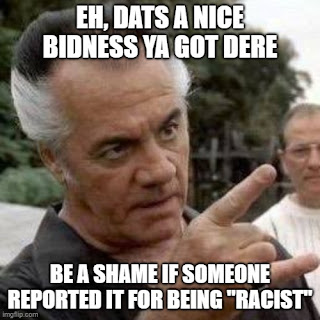 This is dangerous stuff. According to Wikipedia:
As of the second quarter of 2019, Yelp reported having a monthly average of 61.8 million unique visitors via desktop computer and 76.7 million unique visitors via its mobile website. As of June 30, 2019, Yelp stated on their Investor Relations page that it had 192 million reviews on its site.
That is a monthly average of over 138 million unique visitors. Whether that is accurate or not, there are millions of people who make buying decisions based at least in part on Yelp reviews.
Since anything and everything is racist, that means that any company that doesn't toe the line on what is allowed on a given day can be reported and blacklisted, costing them business and if there is anything true about American businesses it is that they are cowardly and terrified of any bad press. There will be pressure to hire internal "monitors" who will make sure none of their employees are engaged in "racist" behavior, which will extend to employees personal social media accounts. Since being a Republican automatically makes you "racist".....well, you know what that means. Shut up about your politics, even in your personal life, or lose your job.
The government won't even have to suppress free speech that runs counter to the prevailing narrative, they simply will subsidize Big Business to do their dirty work for them.
Big Business has picked a side and it isn't our side. The conservative movement needs to figure this out.
Posted by Arthur Sido at 6:25 PM