In a serious country with a functioning media, the story of Hunter Biden being used as a front for Joe Biden, who might be elected President in a few weeks, to funnel funds gained by selling influence to foreign powers would be the dominant news story. No one believes Burisma hired a crackhead like Hunter Biden for their board for any reason other than as a way to pay back Joe Biden for giving Ukrainian power dealers access to the Obama White House.
Since we don't have a functioning media and instead have a bunch of low IQ, talent-less hacks parroting back the same talking points over and over and calling it news, it is left to more fringe outfits like Zerohedge and independent people like Andy Ngo, Project Veritas and Tim Pool to do the hard work of reporting, often while being threatened with violence on one hand and heaped with scorn from "professional" journalists on the other.
That takes us to the Hunter Biden fiasco. The New York Post broke the story and immediately was trashed as a "tabloid". The NY Post has 1.8 million followers on twitter and 4.4 million followers on Facebook. It has been around for a very long time and most notably in 2020 the Post often carries stories that other outlets refuse to carry because they are counter-narrative. What the story is exposing explains how Joe Biden, a man of at best middling intellect and no practical skills to mention, someone that has been a politician for nearly half a century, has nevertheless managed to amass an enormous fortune and live like a king. In 2019 it was reported by the Washington Post that Joe Biden and his wife "Dr" Jill Biden were living in this modest home.... 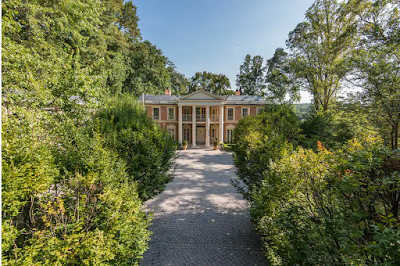 From the WaPo:
The Georgian-style home — from the front a brick version of the White House — once belonged to Alexander Haig, the former secretary of state. Nestled on a wooded lot in McLean, the nearly 12,000-square-foot residence has five bedrooms and 10 bathrooms, marble fireplaces, a gym and a sauna.
“Surrounded by Washington elite and sitting high above the Potomac River, there is an undeniable grandeur in the design of this home,” said the British-accented agent in a video released when it went on the market in 2015. “This property makes an imposing statement with parking for over 20 cars and creates a perfect setting for the most lavish of events.
According to the story, the rent for this place would be about $20,000 per month. Lunch pail Joe indeed.
Where did Biden get all of this money? Sure he did speeches for up to $200,000 per gig back in the day but we also know that those high dollar speeches are often used as a way to buy influence (see: Clinton Foundation). As the meme goes, I am less concerned about someone who is rich and gets into politics than I am about someone who becomes rich after they get into politics.
Then a new report comes out.
Source on alleged Hunter Biden email chain verifies message about Chinese investment firm
It sounds like Joe Biden might be named indirectly as receiving a payout from a Chinese firm, which is of course owned by the Chinese government. You have to know that China really, really wants Biden to win. It would mean an end to American resistance to Chinese unfair trade practices and also a patsy in the White House who will do the bidding of his Chinese masters. Basically what the media has falsely accused Trump of for four years is what Biden will actually be doing in the White House.
Of course the media is trying their best to cover this up, from Twitter suppressing the story completely to running scurrilous stories to deflect attention from the Democrat standard bearer in this election being implicated in a pay for access scheme that enriched him and his crackhead kid.
My theory is a little more complex. The timing here seems odd and the circumstances also seem odd. What if this is a true story released now for a reason but that reason isn't helping Trump?
Stay with me here.
The obvious plan is that Joe Biden is a safe, harmless old man, a placeholder, and his real purpose is to come across as an OK candidate for working class Whites. The intent is never for Biden to serve a full term. This talk about invoking the 25th Amendment to remove Trump? I think it is mostly aimed at setting the stage for removing Biden next year as his mental state continues to diminish. But this incident could be the pretext for a forced resignation or even impeachment in 2021.
What if someone on the Left obtained the Biden laptop and set it up so a Republican would be the one who released it, giving them plausible deniability? What if this is all a back-up plan to build the framework to remove Biden in 2021 and give the Democrats a far more reliably Leftist President? Millions have already voted and most of those who are remaining to vote are pretty set on their candidate.
It would be very in keeping with prior Democrat behavior to start planning for the next administration with the current election far from in the bag. This time they might be right, they have pulled out all the stops, from crashing the economy via a "pandemic" to non-stop, 24 hours a day propaganda and of course the ever present voter fraud made far worse this year thanks to "vote by mail" intended to drag out the election results. If Biden wins the electoral college on election night, the media will declare him the winner immediately. If Trump wins the electoral college on election night, the media will demand patience and caution, and the "votes" will continue to be counted until Biden "wins". To the Left, nothing matters but beating Orange Man Bad so in their twisted minds, lying and cheating is completely acceptable as long as it ends up with Trump out of office in January.
While the MAGA folks are holding huge rallies and convincing each other that this election is going to be a landslide for Trump, the Left is cheating their collective plump asses off and preparing to hold a coup, whether Trump or Biden wins. Can you imagine if Biden is removed and that whore Kamala Harris becomes President, who she would pick as her new Vice-President? Best case scenario would be someone like Pete Bootygag but more likely would be someone like Stacy Abrams.
Remember, this is 2020 and nothing is off the table, not even the Left preemptively torpedoing their own nominee weeks before the election.
Posted by Arthur Sido at 6:34 PM