The Current State Of The Libertarian Party In A Single Tweet

Bill Weld was the Libertarian Party nominee for Vice-President, as the running mate of Gary Johnson, in 2016. He tweeted this out a couple of days ago: 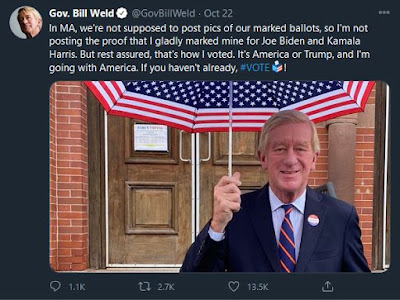 The Libertarian Party VP candidate just four years ago isn't voting for Jo Jorgensen, he is voting for Joe Biden and Kamala Harris, a pair who have promised to flush just about every issue actual libertarians care about down the toilet. Free speech? Gone. The 2nd Amendment? Gone. Smaller, more fiscally responsible government? Not just gone but burned to the ground.
He says he is choosing between Trump and "America" but what exactly is the sort of America he thinks Joe Biden is going to usher in?
How was this absolute piece of shit considered a libertarian? Does that word even mean anything in 2020?
My vote for Gary Johnson in 2016 included this fag on the ticket and is quickly becoming as embarrassing to me as my vote for John McCain.
The libertarian party is dead.
Posted by Arthur Sido at 8:00 AM