The Case For Trump

Things have changed a bit since I started this post thanks to Trump coming down with the Chinese coronavirus but I assume he will recover and even if he doesn't, the same reasoning holds true for Pence.
October 3rd, 2020.
One month to go until the big day, election day 2020, November 3rd, the first Tuesday after the first Monday in November.
The handful of regular readers of this mediocre blog and people who follow me on social media know that I have ample criticism of President Trump. By my measure Trump has been a huge disappointment. The southern border is wide open, we still have troops all over the world, he seems easily led around by the nose to condemn his own followers based on the inaccurate and slanderous statements of the media and his political opponents (but I repeat myself). His judicial nominations have been mostly good but those were made by other people and approved by Trump. Trump's entire tenure has been marked by him trying to pander to people who won't vote for him anyway and ignoring the people who did and will vote for him.
Many people on the Right have washed their hands of him.
I didn't vote for Trump in 2016 mostly because I assumed he wouldn't do what he said he was going to do and that he was just an embarrassing clown. The last four years have done nothing to prove me wrong.
This year? I will be casting my vote for Trump.
It won't make much of a difference, my state of Indiana is going to go hugely for Trump. Based on the political yard signs around here, Trump will carry my district by about 99% with Biden and bimbo Jo Jorgensen splitting the other 1%. Still I will be voting for Trump and doing so with no expectation that he will "Make America/Keep America" great. My reasons are quite different than they were in prior elections when I reflexively voted for whichever person the Republican party decided I should vote for.
Keeping in mind that I am voting explicitly as a White man who is doing the exact same thing every other racial group is doing and encouraged to do: I am casting my vote specifically with what is best for my people front and center. I am way past the point of pretending that race is just differences in skin color and that we can pursue race-blind policies while every other group is making political decisions through the lens of racial politics. Maybe when we were still 85% of the population that worked, but not now. Now it is a fight for survival.
Why will I vote for Trump in 2020 when I didn't vote for him in 2016?
The case for Trump boils down to two main points:
First, it is a strategic vote.
Donald Trump is a megalomaniac and a fool, someone who was born on third base and thinks he hit a triple, while possessing enough personality and charisma to become a pop culture icon, leading directly to his election as President. He has been a disaster for his entire administration to this point, making poor decisions, getting entangled in social media squabbles, hiring people who hate his guts and perhaps, worst of all, giving an enormous amount of influence to his daughter Ivanka and her loathsome husband Jared Kushner.
But.
Donald Trump doesn't hate me and want my family dead. I don't think he really cares about us, we aren't going to be invited to brunch with Donald and Melania, but he isn't intentionally actively working to kill us and see the memory of our people erased from what remains of human history.
The people who are pulling Joe Bidens' strings?
They really do hate me because I am White and they really, really hate me because I refuse to cower and own up to things that neither I nor anyone in my family is guilty of. To the Left I am a "White supremacist" and nothing could be worse than that, even though they have no idea what that term actually means. More on that in a future post.
Another four years of Trump would mean that widespread gun control measures would be off the table, although Trump is squishy on guns. It would very likely mean at least one more Supreme Court justice as Breyer is very old. It would be a significant speedbump on the path to Marxism taking over completely. "Reparations" would still be on the table thanks to Trump surrendering on this issue but at least things like Critical Race Theory would be stymied a little. I am sympathetic to the acceleration position but I still believe a few more years of Trump would give us a little more time to prepare for the inevitable break-up and perhaps be the trigger needed to get the Left to consider dissolving the union.
Second, and this is really the main driver, it is an admittedly petulant act of defiance.
Voting for Trump is the ultimate act of Wrong Think in America 2020. To do so puts you beyond the pale of polite society as defined by the cultural elites. It marks you as a "Nazi" and a "racist" and "insert any other Cultural Marxist slander here". Being a Trump voter means you are a lesser person, not as advanced, enlightened and woke as the Good Whites who will vote for a man with dementia because Orange Man Bad. There isn't a better way to give the middle finger to the people that hate you and think themselves better than you than voting for Trump.
My goodness, can you imagine the epic meltdowns on election night? These people believe Trump is the Devil incarnate. Seeing him re-elected would be like seeing the end of the Bible rewritten so Satan wins.
Really the best reason to vote for Trump is the simplest. Why Trump? 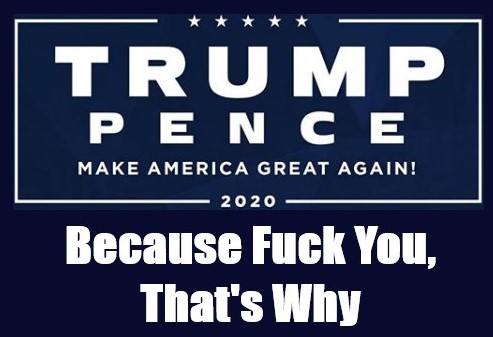