Yet another example of media manipulation. Check out this headline: 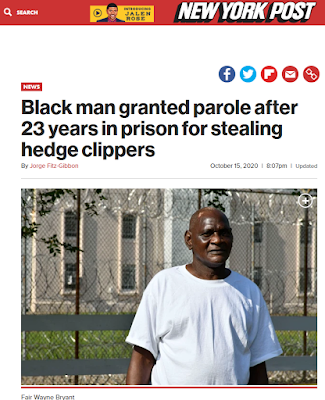 Why, that's terrible! From the article in the "conservative" New York Post:
A black Louisiana man who was sentenced to life in prison after stealing hedge clippers in 1997 was granted parole Thursday.
Fair Wayne Bryant, 63, will get a conditional release following a 3-0 vote of the Louisiana Committee on Parole that comes after he spent 23 years behind bars for the theft of the garden tools from a carport storage room in Shreveport.
The case drew national attention earlier this year when a state Supreme Court panel denied his release despite a dissenting opinion from the court’s only black justice, who called the case a “modern manifestation” of Jim Crow laws.
Kudos to the NY Post for not capitalizing "black" as demanded by the media overlords.
If this man was sentenced to life in prison because he stole hedge clippers that would indeed be an injustice. But as usual, that isn't the whole story. Later we read:
Bryant received the harsh sentence because he was convicted as a habitual offender. His record lists 22 arrests and 11 convictions, among them four felonies that included an attempted armed robbery in 1979.
Oh.
So the real story is that Mr. Bryant was a four time convicted felon, with 7 other criminal convictions and almost two dozen arrests, who finally ran into a judge who had enough and sentenced him to life because it was clear at the time he was going to spend the rest of his miserable life committing escalating felonies until he got killed or killed someone else. He probably should have received a stiff sentence to keep him off the streets a long time before he was busted trying to steal hedge clippers.
Yes, boohoo he had a drug habit but that doesn't change the fact that he was a dangerous felon. It sounds like he got clean and got right with Jesus in prison. More important, he wasn't committing more felonies.
Best case scenario, Fair Wayne Bryant has turned his life around. At 63 he hopefully won't revert back to a life of crime and can have a couple of decades of making amends for being a criminal. I sincerely hope he has a productive, sober, crime-free life.
But he wasn't sentenced to life in prison because he stole some hedge clippers. He was sentenced to life in prison because he had 11 prior convictions, 4 of them felonies, when he was arrested again for his attempted theft. It is safe to assume that if he was arrested 22 times and convicted 11 times, he probably committed far more crimes that he wasn't arrested for. Perhaps hundreds of crimes.
People have a right to not live in constant fear of criminals who commit crimes over and over again. The right of regular law abiding citizens should trump the rights of those who spend their life committing crimes.
Why is this story of a career criminal, a four time felony convicted convict from Louisiana, receiving attention from a news outlet in New York City?
The answer is simple. The media like to advance the theory that black people are arrested for no reason and when convicted are given unfair sentences just for being black. The truth is that A) blacks are arrested more often because they commit crime more often and B) are often sentenced to longer sentences because they have a lengthy criminal backgrounds (see point A).
Saying that makes people have the sadz so we can't say it and it also doesn't advance the idea of America being an awful place full of awful (White) people, so awful in fact that people that aren't White are trying to come here from countries with no White people.
Why are they doing this when it is poor reporting and dishonest, not to mention harmful to the social fabric of America?
In general because the media, like Joe Biden, hate America and especially hate Americans. Joe Biden let slip that he thinks America is just an idea, one we have never lived up to. On the other hand, people like me and most normal Americans for most of our history knew we had flaws but were still the place everyone else wanted to come and start a new life. America was the land of opportunity and as millions of immigrants have proven, if you work hard you can build a great life thanks to the structures put in place by the colonialists, pioneers and founders of America, that you can build something great in America.
The media? They want to see this country torn to the ground, including ironically principles like a free press, and replaced with something new where they think they will be on the top of the heap. I guess they don't remember how journalism looked in the Soviet Union.
Stories like this are the reason no sane person in America trusts anything the media says.
We don't call them the Lügenpresse for nothing.
Posted by Arthur Sido at 7:38 PM