He Wuz A Good Boy, Loving Father, Turning His Life Around, Had Mental Health Issues, etc.

According to reports, there are more than 1,000 people actively looting in Philadelphia right now. A thousand people is an insurrection, a riot. Law and order Trump should be doing something more than tweeting about this.

It isn't even about stealing, it is just a cultural love for wanton destruction. https://t.co/R7xW3QXfdn

The trigger once again is an armed black man, Walter Wallace Jr., refusing to drop a weapon when ordered multiple times to do so by cops. I guess the cops are supposed to wait until he stabs one of them or maybe try to shoot 'em in the leg. Once again the media is being helpful by spinning this as an unjustified shooting: 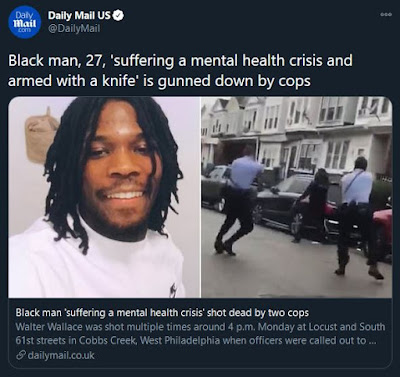 "Gunned down"? The cops kept trying to retreat and he came after them anyway, they shot him because otherwise he was going to stab one of them.
The media trotted out some of his kids and one had this really compelling and eloquent statement.
"We always go places," said one child, whose name was not revealed. "He always teach [sic] me how to be a man. And these white racist cops got my own dad. And Black Lives still matter."
Saying that cops are "racist" is just reflexive for young black kids and this is a serious issue in their community. Who was this noble fellow teaching his boys to be men?
Walter Wallace Jr., who was shot by Philadelphia police, had a criminal history, rapped about shooting cops
Oh.
Court records obtained by the news outlet also show Wallace had a criminal history. In 2017, he pleaded guilty to robbery, assault and possessing an instrument of crime.
Authorities said he kicked down the door of another woman and put a gun to her head.
He was sentenced to 11 months to 23 months in jail. In 2013, he pleaded guilty to resisting arrest and punching an officer in the face, according to the outlet.
At least two felony violent crimes in the last few years. What a model citizen!
Once again the new order says that a black man may not be interfered with during the commission of a crime for any reason. That surely won't lead to 2021 featuring all new record high violence in our cities, erasing the records set in 2020.
Could there be better timing for Trump here, an enormous riot in Philadelphia, the largest city in the swing state of Pennsylvania, just a week before the election?
Posted by Arthur Sido at 11:09 PM