Project Veritas is at it again, doing the undercover investigative journalism the media refuses to do. This time they got on camera a local Democrat operative in Colorado talking some shit about "killing Nazis" and executing billionaires.
This individual, Kristopher Jacks: "is on the Colorado Democratic Party Executive and Central Committees"
From Nationalist Review, a brief transcript.
“I will lie, I will cheat, I will steal. Because that’s morally acceptable in this political environment,” the video begins. “2020 is a political revolution and I am going to do everything morally acceptable to win.”
It’s going to take a strategic hit against the .1% that’s in charge, cause that’s who it is. It’s truly killing random Nazis in the street, random fucking bootlickers. So, if you want to do some Versailles shit, if you want to do some Antifa shit, you really want to change this country that way, with violence, there’s only one way to do it.
You gotta get people that are close to billionaires and start just, random billionaires start turning up dead.
He then specifically mentions Jeff Bezos by name as being on his "hit list". What is "moral" for chubby is anything and everything. Lying, killing, it doesn't matter. Meanwhile most conservatives are still operating under the political version of the Marquess of Queensberry Rules and that is why they lose over and over again.
This the organization that Democrats and the media run cover for while warning us about the phantom menace of "White supremacist domestic terrorism". Antifa is just an idea? This "idea" is talking about assassinating "random Nazis" and billionaires alike. That is inciting terrorism and violence. His employer, CenturyLink has suspended him and notified the cops and the Denver police are also aware this guy is going around talking about killing people.
To be clear, the only thing Kristopher Jacks is going to kill is a whole bucket of the Colonel's Original Recipe or some brain cells while he smokes more dope. 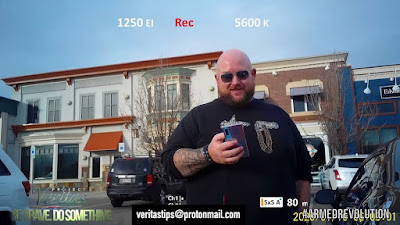 I am not sure he could walk across the street without stopping to catch his breath so he certainly isn't about to storm the beaches of Normandy. I pretty sure you couldn't wedge his fat ass into a landing craft without the assistance of a drum of Crisco.
But also again, the rhetoric he uses incites other people to do crazy stuff, like shooting at members of Congress who are practicing for a softball game. Also worth noting, a corpulent ignoramus like Kristopher Jacks thinks that anyone to the Left of Bernie is a "Nazi" so that means you and your family and your neighbors are probably "Nazis" to Jabba the Commie and therefore he thinks it is OK and quite praiseworthy to kill you. I am sure he won't feel the same way if we shoot back instead of meekly getting into the cattle cars to head off to the gulag.
The violent rhetoric is ramping up and these people are getting ready for something unpleasant on and right after election day. They won't accept a Trump win and are on record as having no qualms about killing their political opponents.
Are you starting to figure out that we are perhaps days away from widespread political violence?
Posted by Arthur Sido at 10:25 AM