Rick Moranis, the Canadian comic known for his roles in Spaceballs, Ghostbusters and Honey I Shrunk The Kids, as well as my personal favorite Streets Of Fire, was assaulted at random in an unprovoked attack in New York City. Because Rick is a famous and beloved comedic actor, the NYPD is working overtime and has already released a photo of his assailant: 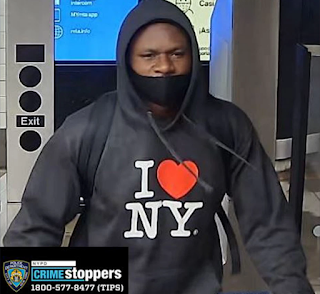 Well that is shocking. At least he 💗 New York and is wearing a mask.
Again, because Moranis is famous it is almost certain this guy will be arrested quickly and be prosecuted to the fullest extent of the law. As is so often the case in assaults featuring these demographics, the man who assaulted Moranis was much larger and younger than the 67 year old, 5'6" (being generous) actor and he attacked him without warning or provocation. What a tough guy! He screwed up by punching a famous person. If he had attacked a random non-famous White person, he would likely have gotten away with it.
These sort of attacks, called "The Knockout Game", invariably feature a young black man or men who assault a White person at random, most often sucker punching them. It has been going on for years but the media ignores it because of the respective races involved.
As I have written before, black on White violent crime occurs Once Every Minute in America and accounts for 90% of interracial violent crime. You wouldn't believe this, and most people don't, based on the media but it is true. White people are not generally a threat to blacks, the exact opposite is true. White people are not attacking homosexual black actors in the middle of the night in Chicago or setting biracial teenagers on fire in Wisconsin. Most White people avoid blacks like the plague because of the unspoken understanding in America that blacks are far more likely to be violent toward Whites, and unpredictably so, than the opposite.
Rick Moranis is fortunate in that as a famous actor his assailant will be quickly identified and arrested but for most White people attacked in America by blacks, there is no justice forthcoming.
In a sane nation, the reality of black violent crime would be front and center in any Presidential debate but as you know, we don't live in a sane country so instead the President of the United States is manipulated into condemning non-existent "White supremacists" over and over.
People are not going to take this much longer.
Posted by Arthur Sido at 8:30 PM