Alphabet Bois At It Again 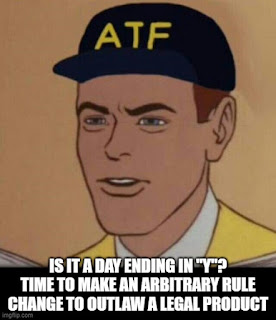 Our friends at the Bureau of Alcohol, Tobacco, Firearms and Explosives, known colloquially as the ATF, have decided to make yet another arbitrary ruling that effectviely outlaws what was until just recently a perfectly legal firearm and once again it pertains to the issue of AR-15 pistol braces*.
If you aren't a gun enthusiast, this might not make any sense. Isn't an AR-15 a rifle? The answer as is often the case is: yes and no. An AR-15 rifle and an AR-15 pistol are essentially exactly the same thing, with minor difference like the length of the gas tube and the buffer. Where the distinction comes in is how long the barrel is. The National Firearms Act, or NFA, regulates certain features of all firearms. Some are available "over the counter" and others require special licensing and a fee. In the case of AR-15s, the NFA rifle rules apply and an AR-15 is considered a "short-barreled rifle" or "SBR" if it meets one of these two criteria:
A) A rifle having a barrel or barrels of less than 16 inches in length;
--or--
B) A weapon made from a rifle if such weapon as modified has an overall length of less than 26 inches or a barrel or barrels of less than 16 inches in length
The first one is the most common. Basically anyone eligible to buy a firearm can buy an AR-15 rifle legally (depending on what state you live in) as long as it has at least a 16" barrel. 16" is probably the most common length of barrel for AR-15s but you can get 18", 20" and even longer. That seems pretty straightforward: 16" or over, regular rifle. Less than 16:, short barreled rifle requiring a special permit and the payment of $200.
But....
You can buy AR-15s with 12.5", 10.5" (most common) and 7.5" barrels. I have even seen them as short as 4.5" which is about as long as some larger frame handguns. Here is the kicker. You can buy them without paying the extra fee or getting the license.
Dafuq? you might be saying. Here is where it gets really weird.
The difference is in the other end of the firearm. A 10.5" barrel AR-15 without a shoulder stock is considered a pistol. It doesn't have a stock and is not designed to be fired from the shoulder. However, AR-15s are relatively front heavy and they also have a tube extending back from the action so they are pretty awkward to hold in just your hands.
Introducing the "pistol brace".
In 2012 as the legend goes, Alex Bosco, one of the founders of SB Tactical, was shooting with a disabled vet. There were concerns because this disabled vet was having trouble controlling the firearm in a manner that was safe for those around him so Alex designed a "stabilizing brace" and applied for a ruling from the ATF. The ATF responded that the stabilizing brace did "not convert that weapon to be fired from the shoulder and would not alter the classification of a pistol or other firearm". In other words, this was still a pistol. Here is a picture of a stabilizing brace on an AK style "pistol"
You don't have to be disabled to buy an AR/AK pistol. You can get them just about anywhere and as long as you are legally able to buy any pistol, you can buy an AR pistol if they are legal where you live. The thing is, it is a pretty grey area.
These are two complete lower receivers from Rock River Arms, a personal favorite AR manufacturer. The receiver on the bottom is a rifle receiver because it has a stock and is designed to fire from the shoulder. The receiver on the top is a pistol receiver because it has an SB Tactical stabilizing brace and is theoretically not designed to shoot from the shoulder. 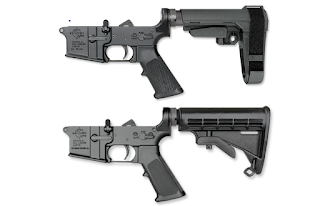 You might notice that they look a lot alike. They function basically the same way. The parts can be swapped back and forth: grip, trigger, receiver, etc. But one makes a pistol and one makes a rifle.
Here is where it gets interesting. There is nothing other than fear of breaking the law that would stop you from taking a 7.5" barreled upper receiver off the pistol lower receiver and sticking in on the rifle lower receiver, creating an SBR. You could do it in about a minute with basically no tools and no expertise at all and without asking for permission from the ATF or paying a fee.
More. Doing that, taking one part from a legal weapon and replacing the same part on a different legal weapon suddenly means you are committing a felony. Get that? Swapping the parts on two legal weapons, on a weapon platform famous for having interchangeable parts, can transform you from a law abiding gun owner to a criminal in under a minute.
What is more, you can and most people do, shoot their AR pistol with a stabilizing brace from the shoulder. While I am sure there are people who are actually disabled and use the brace as intended and as shown in the photo above, most people use their pistol with a brace just like a rifle.
Even much more. You can buy a complete rifle lower receiver like the one pictured above from an FFL dealer. You can also order a complete 10.5" barreled upper receiver from lots of place and have it sent right to you home. You can then put them together in about a minute.
The whole thing is dumb. There are hundreds of thousands or perhaps millions of AR-15 "pistols" in America with 10.5" or 7.5" barrels and "stabilizing braces" that people shoot just like any other AR. The recoil on an AR is negligible for any normal, non-journalist, person so it isn't a big deal to shoot it from the shoulder using a brace although the braces are split, have that velcro strap on them and are not as secure as a rifle stock. It is just a semantics game we play, the ATF pretends they are pistols and so do we, even as we shoot them from the shoulder.
Not everyone at the ATF likes this situation. While the ATF interactions I have had professionally have been pleasant enough, there are some people at the ATF, like most government agencies, who are in their roles because they are assholes and being in the ATF (or the DMV or any number of government jobs) gives them a way to be assholes to large numbers of people without repercussions. There have been threats to reclassify AR pistols with braces as SBRs before but then this happened.
The ATF sent a letter to a manufacturer of AR pistols called "Q, LLC" referencing a specific firearm, their Honey Badger pistol. Here is the Honey Badger pistol, with the brace closed and extended.

The Honey Badger comes with a 7" barrel and is chambered in .300 Blackout and collapses to 20". Remember this would qualify as an SBR but it has a stabilizing brace, not a stock. The ATF pretty arbitrarily declared this was an SBR as it was designed to be fired from the shoulder. According to the Firearms Policy Coalition this was the language used:
“the objective features of the Honey Badger firearm, configured with the subject stabilizing brace, indicate the firearm is designed and intended to be fired from the shoulder.”
There is really nothing different in terms of function on the Honey Badger compared to any other AR pistol with a brace.
This ruling is a shot across the bow of the industry, picking a relative small manufacturer to single out and clamp down on but it has major repercussions for the hundreds of thousands of pistol AR owners. This is causing a huge stink from the industry and some members of Congress but it also is a sneak preview. I assume most the higher ups in the ATF are like every other Federal agency flunkies and are completely sold out to the Deep State and they both fear and hate gun owners. It looks like a trial run for what they plan to do when Biden wins.
It also exposes a huge problem. While the overarching laws are written by Congress, most of the practical rules are created from thin air by un-elected, mostly anonymous and unaccountable bureaucrats. The "law" is one thing, but the laws that govern our lives are completely different. Not only do we not live in a democracy, we don't really live in a Republic. We have the form of a Republic that is really governed by a set of unaccountable mandarins who make the laws we have to live by, capriciously and irrationally most of the time.
Q LLC is recommending their customers with Honey Badgers disassemble them for now while this is being appealed. I assume no one is actually doing that just as no one got rid of their bump stocks and people in states that passed "high capacity" magazine bans didn't turn those in either.
As is usually the case, this is another example of why I keep saying you need to be planning on having whatever sort of firearms you think you will need before the end of the year and at least get them on order now, before the election.
Don't say I didn't warn you.
* I am not an attorney and nothing in this article should be construed as legal advice. Contact an attorney and/or the Bureau of Alcohol, Tobacco, Firearms and Explosives with any questions pertaining to pistol braces, the NFA or any other legal questions regarding firearms.
Posted by Arthur Sido at 3:56 PM