I missed this the other day but here it is, from the Gun Violence Archive: 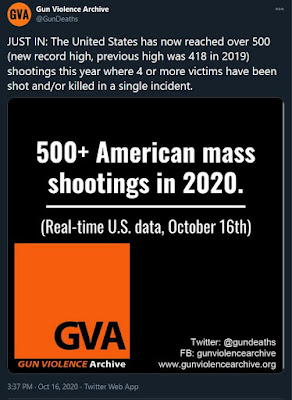 As with the Hunter Biden scandal, in a serious nation with a core group of actual, serious journalists, this would be shouted from the rooftops and be one of the top three issues being discussed during Presidential debates. But this isn't and it won't.
Over 500 mass shootings in America in 2020 with 2 1/2 months and the most contested election in modern history to go, that number is sure to go up and as has been the case all year, the vast majority of these shootings are in the black and other non-White communities. With tens of thousands shot and thousands killed, doesn't that seem like a more pressing problem for the black community than a handful of questionable police shootings?
Congrats "America". The diversity that is our greatest strength is rapidly changing America into something unrecognizable.
Posted by Arthur Sido at 8:25 AM