A Glimmer Of Hope?

As far back as last June, I thought Florida was a huge vulnerability in the Trump re-election strategy. I wrote a post, Do The Math, that looked at the danger of losing Florida and I wrote something pretty prophetic:
Next year is going to be a great year to stock up on stuff you think might become unavailable if the Democrats win. Starting right now is an even better idea.
Even then I knew things were sketchy but of course I had no idea about the double-whammy of Chinese coronavirus and widespread rioting. Had I known I would have stocked way up on ammo and toilet paper.
Anyway, I think Florida is a big problem but here is a bright spot, maybe? 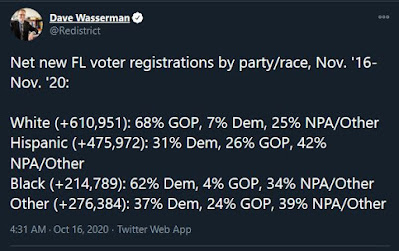 Trump isn't going to win without a huge turnout from White voters, fed up by being told they are racist and angry about the crime and destruction in our cities. The big registration from Hispanic voters is interesting in that almost half have no party affiliation and of no surprise only 4% of blacks registered GOP. The tide of blacks voting for Trump simply isn't going to happen.
Honestly I have no idea what to think at this point. There is so much misinformation and gaslighting going on but I guess we will find out in a few weeks. Until then, prepare for the worse.
Posted by Arthur Sido at 10:26 AM