They Are Starting To Panic

I am seeing more and more stuff like this on social media from Lefties.


Real talk: if Trump is still in office after Inauguration Day 2021 this country will be beyond salvaging for generations. He’s taking us down a very dark path and the hour is already later than people think.
— Aaron Rupar (@atrupar) August 31, 2020

This guy writes for Vox and has almost half a million followers. The replies are hilarious, like this one: 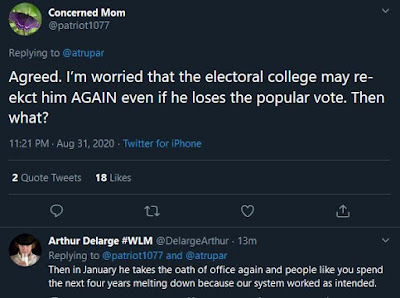 Oh no, what happens if one candidate wins the majority in the electoral college like every President in centuries has done?!

Then again, if this were my candidate, I would start to worry as well:


What does this mean?

They can't accept Trump winning again and with the seemingly endless riots and looting and the random acts of violence plus political assassinations, it is starting to seem like Trump has a better shot than at any point in the last twelve months. If nothing else, disgusted minority voters might stay home in significant numbers. I wouldn't blame them, how could you vote for someone who can't even make it through a brief televised appearance without rambling incoherently?

Better buckle up and buy more ammo, it is going to get spicy.
Posted by Arthur Sido at 2:37 PM