As someone else pointed out, there are just under 40 million blacks in America. Doing some basic math, that works out to about $12,500 for every black man, woman and child in America. But it isn't reparations because we don't call it reparations. Initially I said this was a backdoor reparation scheme but someone pointed out there is nothing backdoor about this, rather this is the equivalent of black America kicking in the front door of White America and screaming "Pay up honky" holding a Glock sideways while Trump claps in  the background.
According to Fox News:
The president’s plan, according to the campaign, will increase access to capital in Black communities by almost $500 billion, help to create 500,000 new Black-owned businesses, and help to create 3 million new jobs for the Black community.
It makes it sound like the government can create a black owned business and that blacks don't already have access to capital. As a former banker I can tell you unequivocally that they have the same access as Whites, Asians and mestizos provided they are credit worthy.
As usual, the deeper you dig in and get past the rhetoric, the worse it is.
From the press release: 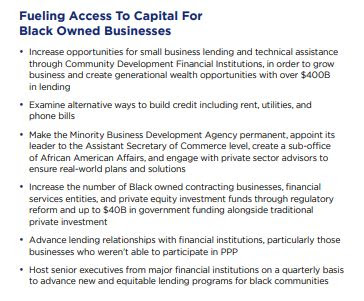 "Alternative ways to build credit"? Generally speaking paying your non-credit related bills like rent and utilities is not something that impacts your credit, because you are not getting credit. You are paying by the month for a place to live and to keep your phone working. It isn't credit and no one else gets credit score improvement for it but Trump is going to give blacks basically an easier to achieve credit system to sidestep the generally poor creditworthiness of blacks.
Getting a loan is not hard: have the income to support the additional debt and a reasonable history of repaying your existing debt. I often told customers this when I was a banker: the bank doesn't want your house or car. They want their money back with the interest you agreed to. That is how they make money, not by foreclosing on houses or repossessing cars. For some reason, encouraging blacks to follow the very basic guideline of not borrowing more than you can afford and paying back the debt you agreed to is entirely unreasonable.
Trump is also promising 3 million new black jobs. How is he going to do that when 3 million jobs would be jobs for  almost 10% of the black community? 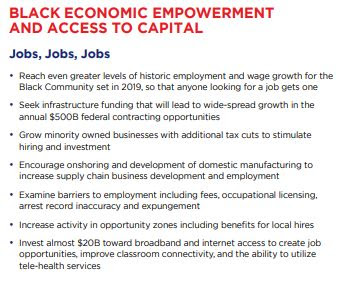 This is a giant handout to blacks with tax cuts that are apparently targeted only at black owned businesses and infrastructure money that likewise will be directed to black owned contractors. It won't matter who can do the best job for the best price, now White owned businesses will be pushed aside so black businesses can get contracts but you can be sure those White business owners will still be expected to pay their "fair share" in taxes.
Here is a baffling one:

In what way is this not already the case for "black churches"? I guess "White churches" don't have poor people they minister to, even though every food pantry I know of is at a predominantly White church. Do we really want churches being treated disparately based on whether they are considered "black churches" versus "White churches"? What about predominantly mestizo churches or Asian churches? Not to mention that once again, White evangelicals are Trump's most loyal supporters and black churches are typically hotbeds of leftist ideology who criticize Trump and Republicans in general incessantly (although no one threatens their tax exempt status like White churches). Of course there is also a First Amendment issue if the government gives tax dollars to black churches based on the racial make-up of their congregation.
More: