Cuties: The Latest Marker Of The Cultural Rift In America

By now most people have at least heard about the controversial movie pushed by Netflix with the cringe-inducing title "Cuties". I wrote about it once already here, Pedo-Flix, and don't have much more to say about the film itself even though now that it is out, others have pointed out some additional scenes like the main character starting to strip for her cousin and taking a photo of her genitals with his phone. Very enriching and what every coming of age film should include.
What has been more informative is seeing how the cultural lines break down in response to the controversy. A lot of Republican law makers have condemned the film and even talked about an investigation. It won't happen but they are at least making the right noise. Democrats? Crickets apart from one notable exception, Representative Tulsi Gabbard.... 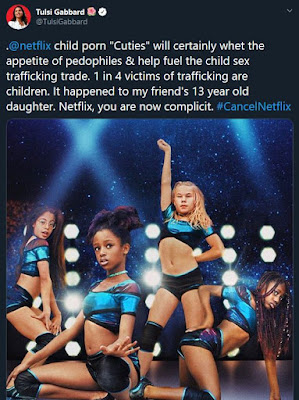 But there is another group that seems to be weighing in on Cuties. Here is the first one: 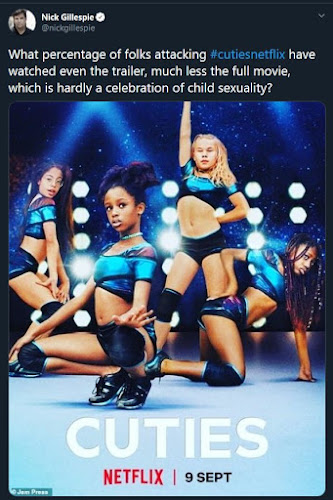 Nick is editor at large for Reason magazine, a libertarian publication that is the source of regular potshots from yours truly. 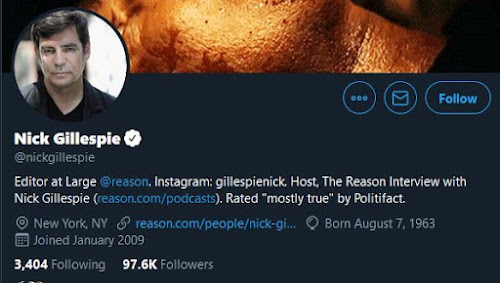 I can't speak for others but I watched the trailer and it was more than enough to get a sense of what was in store. If 5% of the movie is aimed at appealing to pedophiles, isn't that enough?
Many of us laugh about "The libertarian case for...." where the blank is all sorts of crap, but I didn't know that 2020 would bring "The libertarian case for child exploitation". What good is all of the "freedom" if it means turning 11 and 12 year old girls into sexual objects?
The other guy I came across is one Sonny Bunch, the "culture" editor at The Bulwark. The Bulwark is an ego driven project from NeverTrump warmonger Bill Kristol after he ran Weekly Standard into oblivion.

Sonny's implication is that if you don't watch the whole flick, you can't talk about it. Again, I haven't watched the whole thing and I won't. However I have seen the trailer and read depictions of other scenes from a woman who did watch the whole thing and was horrified. I guess I am old school in that I don't feel the need to actually watch child pornography in order to condemn child pornography. Call me old fashioned.
Anyway this is Sonny.... 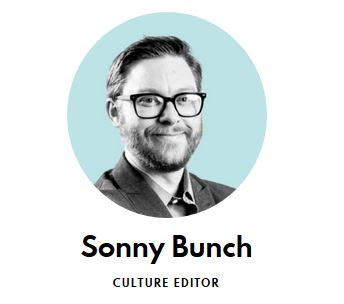 Now, I am not going to say that Sonny Bunch looks like the kind of guy who would watch a film about 11 year old girls twerking. Actually scratch that, that is exactly what I am going to say. In fact I am going to suggest Sonny looks like someone who has pre-ordered the director's cut blueray and is desperate to get his hands on the audition tapes of 600 11-year old girls twerking for the director. Also, when I saw Sonny I kind of wondered and so I did a little investigating and it certainly seems like he might be a member of a certain, shall we say "chosen", demographic.
Some of this might just be creepy perverts being creepy but I think a lot of it is a knee jerk reaction to regular American conservatives being understandably outraged. If the people who vote for Trump are agi'n it, imma fer it! 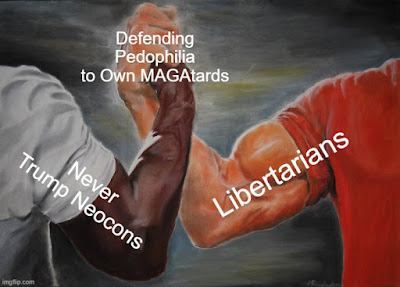 As 2020 unfolds and we approach the 2016 election, it is increasingly clear that on the issues of culture and civilization, the majority of D.C. libertarians and neoconservatives are much more in lockstep with the radical Left than with conservative Americans.
The Beltway "Right" is a fifth column that demands our support and works tirelessly against our people.
Posted by Arthur Sido at 8:00 AM