Most American seem to not realize we have an election coming up. At least it seems that way but that might be because I live in a deep red state that is not competitive so there isn't a Biden sign or bumper sticker to be found anywhere.

Just as many people are forcing their eyes closed and pretending that this will be a regular election and the person who gets the majority of electoral college votes will be the winner, something we will know the night of election just like we generally always do. Other than the 2000 election, the results of the Presidential election were known right away on election day but in 2020 with millions upon millions of mail-in ballots, the counting might last for weeks and no one with an ounce of sense trusts that we are going to get a valid count from mail-in ballots. Just this morning I saw this story:

Georgia’s top elections official said Tuesday that his office has identified about 1,000 cases of “potential double voting” in the June primary election — a felony he’s determined to see prosecuted.

These voters submitted absentee ballots but also voted in person, a problem that happened across 100 Georgia counties, and election officials didn’t catch them in time to keep the second votes from being tallied, Secretary of State Brad Raffensperger said.

Oh. That is comforting. That was just a primary election, so you can only imagine what will happen in a Presidential election.

Chaos on election night and the weeks following is by design. If you can't win outright, then the next best thing for the Left is to create uncertainty. Did Trump win? He might seem to have won but with an untold number of mail-in ballots out there, who knows? Planting the seed of doubt in the minds of the average voter is the goal. It can be tempting to get caught up in an alternate reality where you assume everyone in America is paying as close of attention to what is going on as you are but that is not the case. Most Americans are willfully and utterly clueless about what is happening and they still mostly believe what the media tells them. They might be skeptical but they still believe it.

The seeds of a possible coup are already germinating in the fever swamps of the Left's imagination.

Coalition of more than 50 leftist groups preparing for "mass public unrest" if election results are unclear, or Trump disagrees with reported Biden win

Reading between the lines, it certainly sounds like a threat. If Biden claims to have won, regardless of the results, there are plans for violence to force Trump to step down. I am pretty sure that if Trump is sure he won, he isn't going to go quietly nor should he.

Hillary Clinton recently declared the under no circumstances should Joe Biden concede on election night.

Hillary Clinton: Joe Biden Should Not Concede Election ‘Under Any Circumstances’

That is pretty incredible. We are just under two months away from the election and the former nominee for the Democrat party is saying that the current nominee shouldn't concede the election "under any circumstances". So even if Trump finishes election night with comfortable leads in all of the states he won in 2016 and even a couple of extras and has an insurmountable electoral college lead, Biden still shouldn't concede.

Then this was reported by the New York Times, the official party organ of the Democrats:

How the Media Could Get the Election Story Wrong

We may not know the results for days, and maybe weeks. So it’s time to rethink “election night.”

Later in the story we get the really juicy part: Democrats are holding election night "war games" where they go through scenarios for election night and the weeks after to determine what their response should be. The last few paragraphs are ominous...

But conveniently, a group of former top government officials called the Transition Integrity Project actually gamed four possible scenarios, including one that doesn’t look that different from 2016: a big popular win for Mr. Biden, and a narrow electoral defeat, presumably reached after weeks of counting the votes in Pennsylvania. For their war game, they cast John Podesta, who was Hillary Clinton’s campaign chairman, in the role of Mr. Biden. They expected him, when the votes came in, to concede, just as Mrs. Clinton had.

But Mr. Podesta, playing Mr. Biden, shocked the organizers by saying he felt his party wouldn’t let him concede. Alleging voter suppression, he persuaded the governors of Wisconsin and Michigan to send pro-Biden electors to the Electoral College.

In that scenario, California, Oregon, and Washington then threatened to secede from the United States if Mr. Trump took office as planned. The House named Mr. Biden president; the Senate and White House stuck with Mr. Trump. At that point in the scenario, the nation stopped looking to the media for cues, and waited to see what the military would do.

They were "shocked" when Podesta, playing as Biden, refused to accept the results? Bullshit. The content of the these "war games" was not released accidentally, this was intentionally published as a warning:

Biden wins or else.

No other scenario is acceptable. Notice that the scenario where Podesta/Biden convinces the Democrat governors of Wisconsin and Michigan to send Democrat electors is one where the majority of the votes went to Trump but these governors refuse to abide by that because of "voter suppression". Of course there is no evidence whatsoever of "right wing" thugs intimidating people at the polls but there is evidence of the Black Panthers lurking around with clubs in front of polling places in 2008. 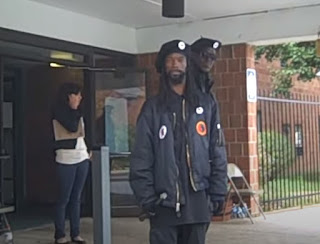 You can watch the video I grabbed this shot from here.

Notice the hostility and the implied threat. A "poll observer" doesn't show up with a billy club.

In the above mentioned "war games" some scenarios include:

- Ignoring the voters and sending Democrat electors to the electoral college.

- The West coast states of California, Oregon and Washington threatening to secede, something I am completely in favor of. Enthusiastically so.

- Most ominously, the House of Representatives declaring Biden the winner even though he didn't win and then these words: "waited to see what the military would do"

This is where we are. One side is threatening to ignore the election results, secede from the Union and even suggesting that the military pick sides to force Trump to leave even though he won the most votes in the electoral college. Again, this was released not as an interesting tidbit but the words used were specifically chosen to convey the threat. This election is heads Biden win, tails Trump loses.

Notice also what you are not seeing, namely the threat of violent actions by the Right if Trump loses. While Congress has hearings focusing on the phantom menace of "White supremacists", the only real political violence is coming from White communists and non-White rioters and looters.

When Obama won in 2008, I recall quite clearly the next day. We were living in Michigan at the time and the morning after he won, I was fueling up my car on the way to work. A White guy looked at me and something unspoken passed between us, we shrugged in resignation and went about our lives. Having said that, David Harsanyi at National Review notes:

A recent USA Today poll found that 28 percent of Biden’s supporters say they aren’t prepared to accept a Trump victory as “fairly won,” and 19 percent of President Trump’s supporters say the same about a potential Biden victory. So a significant minority of American voters don’t believe the next election will be legitimate before it has even been conducted.

More than a quarter of Democrats and almost 1 in 5 Republicans are already on record as saying that the election won't be a fair one, at least not if their candidate doesn't win but only one side is talking about calling in the military to intervene.

In 2020, the nation and the people have been put on notice. A significant chunk of the media and government are on record saying that there is only one election result that is acceptable. That is Soviet Union level talk. We will have an election to keep you peasants appeased but only one party is going to win anyway.

Think about this. Really, really think about it. One political party has gone public as having serious conversations about the military intervening in an election if the results don't go their way. What kind of banana republic level of bullshit is that?

Anyway, that brings me to the coronavirus.

Now, I don't know if the Chinese coronavirus was intentionally released from a bioweapons lab or it got loose accidentally. It doesn't really matter at this point. It is here and has dominated American society for most of 2020.

Two things can be simultaneously true about the coronavirus.

One, it is a significant and serious virus that is dangerous to people who already have serious health issues or are aged. It is reasonable and prudent to take precautions, again especially for the elderly or people with chronic health issues. By the way, that is always true.

Two, the response to the virus is mostly political and is looking more and more like it is designed to create chaos and uncertainty.

The commanded steps to "combat" the coronavirus were supposed to take a few weeks to "flatten the curve". That was months ago. Now it is starting to seem to suspicious types like there is more in play here than "public health".

- Trump feeds off of the huge crowds he attracts while Biden couldn't fill a gas station bathroom on his best day. Oddly enough, giant rallies are now prohibited while mass protests and funerals for Democrats are not.

- People have voted in person since we had voting in America but now the media has frightened tons of people into voting by mail, which is fraught with all sorts of issues.

- The economy which was humming along collapsed into mass unemployment in the spring of the election year. Weird!

It takes a special sort of callousness to torpedo the entire economy just to rid yourself of Orange Man Bad but those kind of callous people are in ample supply in our nation's capitol.