Trump is one of those rare beasts, a politician who occasionally slips some truth into what he says. That was on display recently when he held a rally in North Carolina on September 8th. About 47 minutes into his speech he made this admission (uploading straight into the blog as I am suspended on Youtube again):
Here is the money quote spelled out:
The fact is, we don’t have to be in the Middle East, other than we want to protect Israel. We’ve been very good to Israel. Other than that, we don’t have to be in the Middle East. You know there was a time we needed desperately oil, we don’t need that anymore.
Yep, the only reason we are in the Middle East is to protect Israel and those sheep in the crowd applauded.
I don't have any specific ill will toward Israel as a nation, but I do harbor no small amount of resentment that we give a highly developed nation with a per capita GDP higher than France, Japan and the UK billions in "foreign aid" every year. Not to mention that  we spend billions or trillions on military adventures in the Middle East which also cost American lives and have for decades, and apparently plan on doing so indefinitely even though we don't need the oil anymore.
The lobby for Israel has pretty cleverly managed to convince American politicians that they must have slavish devotion to Israel that translates into a) never, ever criticizing Israel and b) requiring endless American lives and money spent on Israel's behalf. Thanks to the klutzy dispensational theology so prevalent among American evangelicals, there are millions of conservatives who seem to conflate mindless support for Israel with being patriotic and a good Christian. They are being played for suckers but they don't seem to realize it and get quite upset if you point this out.
Meanwhile actual Jewish voters in America vote overwhelming for Democrats and always have. In 2016, Jews voted more than 3 to 1 for Clinton. 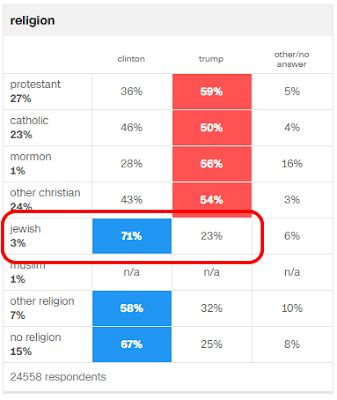 There is no reason to think that will change significantly in 2020.
Trump promised to put America first but it often seems like he spends his political capital for Israel rather than America.
Noticing that this is the case, or any number of other patterns, gets you labelled "antisemitic" but that doesn't make it less true. Trump flat out admitted what many of us already knew: we are in the Middle East primarily to protect Israel.
Posted by Arthur Sido at 9:09 AM