I wrote over the weekend about Solomon Jones, a columnist for the Philadelphia Inquirer, who wrote about buying his first gun not for protection from the people likely to actually threaten him, other black men, but rather from the boogeyman of "racist White Trump supporters". The statistics are tiresome but apparently bear repeating: Whites commit violent crime of all sorts and especially murder at drastically lower rates than blacks and far lower than our proportion of the population. 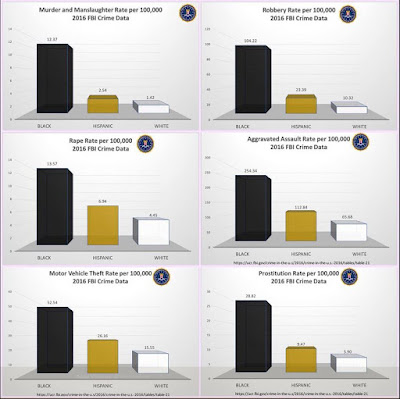 Anyway, in general the media hates guns and hates people buying guns legally. Most of the time that is to say. When the buyers are White people, it is an ominous sign of impending violence but when the buyers are black? Well the media is ecstatic. From the Detroit Free Press:

Gun sales are rising in Michigan. The buyers might surprise you

In the midst of these changes, gun owners are becoming more diverse. Nearly 15% of those who bought guns during the first six months of the year are Black, an increase of more than 50%, according to a survey from the trade organization National Shooting Sports Foundation.

Blacks are around 13% of the population and many live in predominantly black neighborhoods where violent crime is most widespread. So no, that doesn't surprise me all that much. However, as you read through the article, you start to see a theme that keeps popping up and shockingly it is "racism"....

The jumps coincide with the early days of the pandemic in Michigan and the death of George Floyd, a Black man killed by a white Minneapolis police officer on Memorial Day.

The jumps in background checks were caused by the riots that followed the death of drugged up career violent criminal George Floyd. I know this first hand.

Gun clubs saw increases in memberships, especially from women worried about personal protection and people of color concerned about their safety and racism, according to club leaders in Mid-Michigan.

“The image that pops into people’s minds when you say gun owner is not a good image, and I consider myself someone who is trying to change that,” said Olsen, 35, a Lansing resident who is white and doesn't identify as conservative.

Why would the image of White conservative males be "not a good image" to Tracy, who is also White? Maybe the picture helps explain: 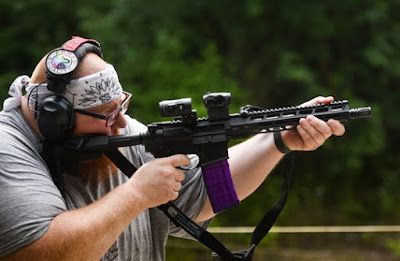 Tracy is described as a "LGBTQ ally" and his ear protection has a button that proclaims "Armed Equality" with the rainbow colors. Looks like he is also an "ally" of all-you-can-eat buffets and jelly donuts. Me too.

Tashmica Torok, who is Black, said she wouldn’t have considered buying or owning a gun five years ago.

“But then I also didn’t have white men showing up at the Capitol, five minutes from my house with semi-automatic weapons,” said Torok. “I just didn’t think I’d have those gunmen five minutes from my home during a season of anti-Black violence that has increased and the lack of protection that Black people experience from law enforcement. There’s like this perfect storm of violence and white supremacy that has definitely made me reconsider the purpose of having a gun in my home and whether it’s worth having one.”

Tashmica is terrified because (actually peaceful) protesters went to the Michigan Capitol and many of them were legally carrying firearms. No one was hurt but in the liturgy of the American Left, the protests at the state capitol in Lansing were basically a Klan rally.

Again, Tashmica regurgitates the lines about "a season of anti-black violence" in spite of any evidence to support that claim. There simply isn't widespread "anti-black violence", not from the police and not from "White supremacists". It is pretty amusing when blacks complain about the "lack of protection" from cops. When cops do their job and arrest criminals, often black criminals? Racist. When they don't arrest criminals? Also racist.

Marie Duncan, of DeWitt, bought her first gun in February after family members urged her to consider it. She finished a gun safety class in July. Today, she feels having a gun in her home for protection is “as necessary” as her refrigerator.

“I just feel like we’re in a time right now where things are so unexpected,” said Duncan, who is Black. “Unfortunately, we live in a time when racism is on a high. It’s almost something we breathe every day. We have police brutality going on and it’s almost like you can’t trust anyone anymore.”

The "rhetoric" coming from President Donald Trump isn’t easing fears about personal safety, according to Mujahid Abdul-Hameed, president of the Malcolm Little Gun Club, a chapter of the National African American Gun Association.

“We hear the racist talk from the president,” Abdul-Hameed, 70, said. “He is not blowing a dog whistle. He is saying it outright.”

The state of the world is why Abdul-Hameed is cautious about his own safety. Whether he is taking a trip to Walmart or elsewhere, he makes sure to bring his gun with him.

It is smart for Abdul-Hameed to go around armed but not because of "racist" Trump voters but because of the "people of color" who overwhelmingly commit gun violence. He lives in Lansing which has it's share of gun violence but as is almost always the case, it is happening in the very same black community he is urging to arm themselves for protection against "racists".

You get the point. Lots of huffing and puffing about the Lansing protests, which again resulted in zero violence or any criminal behavior at all. Meanwhile black on black violence and black on White violence continues unabated. Just last night hundreds of people, mostly black based on the videos, looted luxury stores in Chicago in response to Chicago police shooting a black man who was shooting at them. Detroit, around 85% black, is one of the leaders on the list of murders per capita and virtually all of the murders are black on black. The other large cities on that list like Baltimore, Flint, Gary and St. Louis also have large black populations and the shootings are black men shooting other black men (and black women and black children caught in the crossfire).

Like virtually all gun owners and enthusiasts, I am in favor of more people responsibly and legally owning firearms so I applaud blacks buying guns and getting training to use them responsibly. What I will not let go unanswered is the media attempts to smear White men like me as violent "racists" when we are not a danger to blacks who are not first a danger to us. Black people are being lied to all day, every day, and this makes them blind to the real threat from their own community and resentful and hate-filled toward people like me who are no threat to them.

By all means, arm yourself to protect your family, property and yourself but at least take the time to understand what the real threat is.
Posted by Arthur Sido at 11:28 AM