Who Is Going To Tell Him?

Something true of almost all small city journalists is that they desperately want to be taken seriously by their big city brethren (see also: sports reporters and teachers at religious schools). In 2020 the way you signal that you are a Super Serious Journalist is by writing garbage stories about "racism". So when a young Student Of Color at Manchester High School, in North Manchester, Indiana which is close to Fort Wayne, was the victim of a hateful hate crime of racist hate at school, the media jumped all over it. What happened to him? Was he jumped by two White guys shouting "this is MAGA country!"? Was he set on fire by four White Wisconsin frat boys? Did he find a noose in his garage?

No, even worse. He was sent home from school to change his shirt.

His mama ain't having it.

A mother is accusing Manchester High School of racial discrimination

This is the shirt her kid was wearing..... 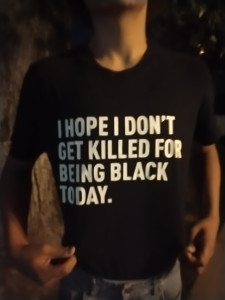 His mama, a White woman named Dawn Eades, maybe should know enough to teach him that nobody is getting killed for being black in America and that most blacks who are killed are killed by other blacks, not "racist" Whites. After all his mama chooses to live in North Manchester which is 95% White and only around 1% black. If she is really afraid of her son Dondre getting killed because he is black, wouldn't it make sense to move somewhere with fewer White people?

Makes me wonder what his mama would think about a White student wearing a T-shirt that had this written on it:

I suspect she wouldn't approve of that message even though it is factually accurate.

On the other hand, a brief review of Ms. Eades Facebook page reveals this charming message: 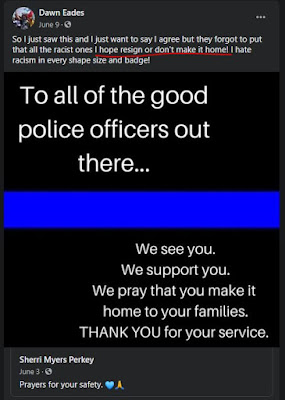 What a lovely thought! She thinks "racist" cops deserve to die. One can only imagine what her little darling son thinks of cops.

Generations of blacks have been raised to believe that White people are dangerous and cops are out to get them. Even though that is easily debunked, it doesn't matter because it turns out that citing facts and statistics are White supremacy. All that matters is how something makes me feel.

Meanwhile the stories of black on White violent crime get little attention. The story of Cannon Hinnant drew a lot of attention but that is quickly fading as the media drops the story like a hot potato, only days after begrudgingly giving it any attention at all. Then last week came the story of a 17 year old old girl named Veronica Lee Baker who was found shot to death in her car. Arrests were soon made and the accompanying pictures are distressingly familiar....

She was just 17 years old. Charged and arrested for her murder, another 17 year old named Devin Cordell Jones 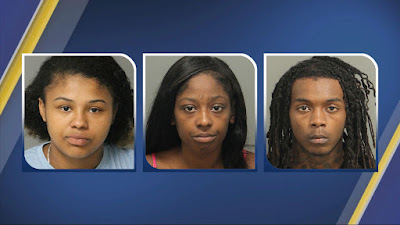 According to Veronica's father, she and her alleged murderer knew one another and were friends. He also believes that this was a robbery gone bad.

A 17 year old White girl is dead. A 17 year old black male is her killer and now faces most of the rest of his life in prison. Three other black teens are facing felony charges as well. Minimal media coverage.

Then we have Dasean Damont Morris.

Morris is 18 years old and charged with murdering a White father named Kyle Hagenbuch. Magenbuch was apparently out riding his motorcycle with friends when Morris drove past them, stopped and got out of his car, and fired into the group, striking Hagenbuch and killing him.

On and on and on. The names change, the story doesn't.

But by all means, Dondre Eades should be super worried that the Klan is gonna git 'em while he attends his lily-White school.

Don't tell Dondre the truth, it might upset him.
Posted by Arthur Sido at 9:41 AM