As a Gary Johnson voter in 2012 and 2016, I know all of the arguments in favor of voting Libertarian. I also realize that while Libertarianism sounds good in social media arguments, in the real world it falls apart because it utterly fails to understand human nature and refuses to dwell in the real world.

Gary Johnson had his ardent supporters but his support was more philosophical than personality driven. As the nominee in 2016, he was in a perfect position. Both major party candidates were very weak, Trump carries a ton of baggage and Hillary is completely unlikable and corrupt. If ever there was a time for a third party candidate to shine, it was 2016. Johnson's campaign did OK with 3.5% of the vote but it was barely a blip on the radar in the big picture.

Since 2016 the national Libertarian Party has imploded into a vortex of weirdness. The kooks and crackpots are running the show and more serious libertarians have either abandoned the Libertarian Party or abandoned libertarianism entirely. That has left behind only the nutjobs. I wouldn't care but I am seeing a handful of fanatical, and that is an accurate term, supporters of Jo Jorgensen popping up on social media groups, especially firearms and 2nd Amendment groups.

Their bullshit is always the same "Muh bump-stockz!" and "Jo will abolish the ATF!".

The bump stock ban was obviously a mistake. Following the Las Vegas shooting, and weird we still know next  to nothing about what motivated Stephen Paddock, the NRA signaled support for regulations on bump stocks. This was likely a P.R. and pragmatic move, the understandable concern was that a bill to ban bump stocks was preferable to more sweeping regulations. A few months after the NRA signaled support, Trump ordered the ATF to basically ban bump stocks. It is safe to assume that essentially no one who owned a bump stock turned them in or destroyed them.

Bump stocks are toys, gimmicks. I have been around firearms my entire life and had never heard of them until the Las Vegas shooting. Banning them was still a mistake but that same year, 2018, both Trump and Pence spoke at the NRA annual meeting in Dallas and then the following year they both spoke at the NRA annual meeting in Indianapolis, which I attended but not the speech by the President or VP.

Do you think Joe Biden or Kamala Harris will speak at the NRA annual meeting in 2021 if they win?

There hasn't been a President as vocally supportive of the 2nd Amendment in my lifetime. He hasn't done as much as I would have liked to advance gun rights but in general he has been a friend of gun owners.

Biden? I have already killed many pixels detailing the Biden gun control plan: The Future Of Gun Ownership (Or Lack Thereof). Bottom line, it is sweeping in scope and aggressive in stamping out individual gun rights.

One of two people will be sworn in as President in January. Donald Trump or Joe Biden. Option A or Option B.

You don't have to like that we only have two choices but we do. We live in a nation of over 350 million people. In 2016 about half voted for Donald Trump and a few more voted for Hillary Clinton. A few million people voted third party but that made little difference in the outcome of the election.

Don't get sucked in by the "Abolish the ATF!" rhetoric. Jo Jorgensen isn't going to abolish the ATF because she is never going to be President. Ever.

There is no plausible or even implausible scenario in which Jo Jorgensen gets enough votes to win even a single state like New Hampshire or Montana, low population and generally independent minded. There isn't even a scenario where she gets 10% of the vote in a small state. In 2016 Gary Johnson got over 5% of the vote in 9 states but didn't break 10% in any state. The most populous state he broke 5% in was Colorado with 2.7 million votes cast and Johnson pulled 5.18% of the vote. Big states like Ohio, Texas and Florida? Right around 3%. Something else worth considering... 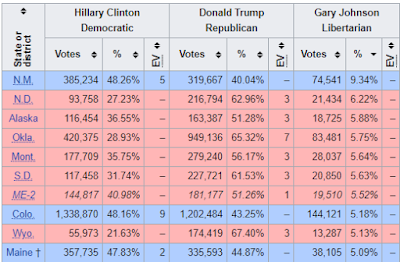 Maine has a goofy split electoral college vote so they are on there twice but what else is noticeable is that of the 9 states Gary Johnson got more than 5% of the vote only two, Colorado and New Mexico where Johnson was governor, voted for Hillary. The other six are Trump states.

I am hearing a lot of Gary Johnson voters who, like me, are done with the Libertarian party and are likely to vote for Trump. I have written elsewhere about Jo Jorgensen and her advocacy for de facto open borders ( Those Wacky Libertarians! ) and her praise of black Lives Matter ( The Libertarian Case For Marxism! ) and I would be very surprised if Jo doesn't get a much smaller percentage of the vote than Gary Johnson in 2016.

She is not going to "win", not in any sense but she might pull enough votes from Trump in critical states to flip states like Michigan to Biden. I guess that electing a globalist puppet with dementia, a mere place-holder for Kamala Harris who is even worse, is a "victory" for liberty or something.

Libertarianism is an example of the perfect being the enemy of the good. There are not many actual libertarians in America and there are certainly not enough to win elections, at least not elections of any significance. We are left with a choice between a Republican who is sometimes inconsistent but generally very pro-2nd Amendment or an empty suit with Alzheimers who has already promised to lay waste to the 2nd Amendment. Sure it sounds great to get rid of the NFA and disband the ATF but that isn't going to happen. There is no political will to do so and there is no chance Jo is going to get elected.

Jo Jorgensen's small but vocal fanatical supporters really are as loony and immune to common sense as King James Only zealots. They would be best ignored but unfortunately they might convince enough voters to join their delusions to ensure the end of private firearms ownership in America.

Things are too dangerous in America to play "what if" in this election.