The Time Grows Short My Friends

Under three months until election day. A doddering fool who was never very smart to begin with picks an empty shell as his running mate. Kamala will do whatever she is told in order to gain and retain power, just ask Downtown Willie Brown. Biden is leading in the polls all over the place and while I understand the inherent problem with polling in 2020, demographic changes plus a media that learned their lesson plus what will certainly be widespread voter fraud equals a tough road for Trump's re-election, assuming he even wants to be re-elected. Kamala Harris is a wet dream for the anti-2nd Amendment crowd and old politicians who have a hankering for younger skanks alike.

The general ammo shortage shows no signs of abating and if anything prices continue to skyrocket. The manufacturers I work with who produce AR-15s are telling me that they are months out on production. For example, CMMG who makes premier quality ARs and the Banshee PCC is at least 12 weeks out on production....

12 weeks from today is November 9th, almost a week after the election. Rock River Arms, another higher end manufacturer of AR-15s, is running 90 days out on AR uppers. In other words, if you don't have your orders in pretty soon, there is a decent chance you won't get them until next year and by that time Biden could be sworn in and that could quickly be the end of the AR industry.

Meanwhile violence continues unabated across the country, hidden from view by the media but there nevertheless.

Portland has been dealing with nightly riots for months and a motorist was nearly beaten to death a few days ago. American citizens are facing the grim choice between getting dragged from the car and given the Reginald Denny treatment or using lethal force to protect themselves and likely facing arrest for doing so. Getting kicked in the head or hit with a blunt object is often lethal so I know which option I will choose.

City after city reports record breaking violent crime. We know about the rampant crime in places like Chicago, Baltimore and St. Louis but now it is spreading to other, smaller cities.

In Cincinnati, Ohio where I worked for a number of years, there were 18 people shot in 4 incidents overnight Saturday with four people killed. This is just part of the trend in Cincinnati in 2020.

Shootings have been elevated all year. Homicides are also up. Sunday's killings bring the total to at least 65. Last year at this time, there had been 46 homicides.

Cinci has always had some trouble spot, like Over-The-Rhine, but these numbers are huge in what is usually a quiet city. At this rate, Cincinnati will have more shootings that any year since 1971, the year I was born.

A friend in Louisville, Kentucky reports that L'ville has more murders already in 2020 than all of 2019 with more than four months to go in 2020. Carjackings are also skyrocketing.

In Denver, Colorado the story is the same:

The city is on course to have the highest number of homicides seen in the city in a single year since 2004, data collected by The Denver Post shows. Fifty-eight people have died in homicides so far this year, including seven who have died in shootings and stabbings on Federal Boulevard.

Philadelphia has been a slaughterhouse all year:

7 Dead, 25 Hurt in 25 Shootings During Another Violent Weekend in Philadelphia

It was yet another violent weekend for Philadelphia plagued by the highest number of homicides the city has seen up to this point in more than 13 years.

Deputy Managing Director Vanessa Garrett Harley, the city’s top official for violence prevention, and Temple University gun policy researcher Jason Gravel told NBC10 that they believe the COVID-19 pandemic could be compounding a gun violence epidemic that has been getting worse in recent years.

Lots of these stories quote the cops as saying that coronavirus is the reason that shootings are up, not that police pulling back has emboldened the criminals. We all know better.

In nearby Fort Wayne, the numbers are grim. I pulled this from the webpage of the Fort Wayne police department: 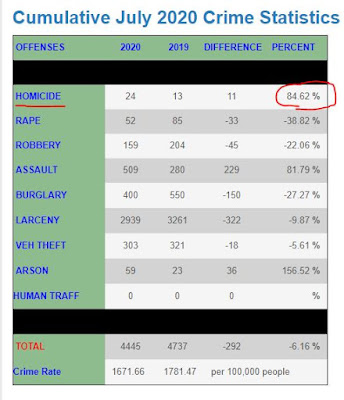 The increase in charges for assault and arson are likely tied to the "mostly peaceful protests"/riots and looting over the summer but murder is way up. My post in January looking at homicides in Fort Wayne, The Color Of Crime In Fort Wayne, identified 29 people murdered in Fort Wayne/Allen in 2019. We are going to blow right past that number in 2020.

Just as a note, I didn't look very hard for this information but most people don't really know this is going on. They think things are bad in whatever city they are near but that it is isolated when in fact it is almost universal.

What do you think things are going to be like in a few months? One of two things will happen:

1. Trump wins re-election against all the odds.

If Trump wins again, the Left, having been thwarted time and again in trying to reverse the election of 2016, will go crazy. They know that Ruth Bader Ginsburg won't make it four more years. I would expect serious violence to break out across the country and I wouldn't be surprised to see an attempt at a violent coup. The Secret Service is good but if 2000 armed antifa storm the White House gates, what would they do? It wouldn't surprise me if the military was quietly put on standby on election night, just in case. Regardless of the winning margin, the Left will claim the election is illegitimate. States and cities might stop recognizing Federal authority. Bottom line, the Left won't tolerate a Trump win. They can't.

If placeholder Joe wins, I have been predicting pogroms of vengeance against White, middle-America Trump voters. It would surprise me if we didn't have some sort of false flag mass shooting involving the rare White male shooter by the end of the year or early into next year to give political cover for politicians to pass a new "assault weapons" ban.

When AR/AK rifles are banned, if the ban includes a ban on current owners, it will become a test of wills. Citizens won't surrender these rifles, nor handguns with "high capacity magazines". Will the government try to force the issue, leading to bloodshed and mass revolt, or will the government let people thumb their noses at the Feds?

Either way, the unrest is just getting started and with less than 90 days until the most contentious election in my lifetime, you are running short of time.
Posted by Arthur Sido at 10:44 AM