The Fuse Is Lit

A typical midwestern city that most people never even think about. This week the once sleepy little town exploded with "protests", what normal people call rioting. The trigger was the shooting of a violent black criminal who had just tangled with cops and was apparently going for a knife in his car. That isn't the narrative we got initially and it isn't the narrative pushed by the media. At first we only saw a brief clip, filmed from the far side of the car, conveniently missing the black man, Jacob Blake, fighting with the cops. All we saw was him walking around the car, ignoring repeated shouts to stop from cops with guns drawn. We didn't see the fighting with the cops or the attempt to taser him into submission. I am cautiously hopeful that the DA won't do the usual cowardly act of charging the cop with murder just to try to appease the crowd.

Of course, as with any time a black man dies, riots ensued. It doesn't even matter the reason. A black man shot himself in Minneapolis and the rumor mill said the cops shot him, so of course they rioted again. I guess it is the cops fault this guy shot himself.


Doesnt look locked down to me...

Looting is now taking place at the Nicollet Mall in Minneapolis after a man committed suicide while being pursued by police. Any excuse to riot. pic.twitter.com/LGVY7DVX6E
— Andrew Beverley (@AndrewBVCU) August 27, 2020


Stealing crap for justice! They has the insurance so it is OK!

Then a young White kid, only 17 years old, ended up in Kenosha to try to help business owners defend their property. He was attacked, chased down a street, hit with a skateboard and one adult man was threatening him with a gun. He defended himself and two commies are dead and one had a huge hole blown out of his arm.

The cops arrested him the next day.

This had all the signs of being another James Fields incident but regular conservatives started to pay attention. Suddenly attorney Lin Wood (the attorney for the Covington Catholic kids lawsuit) announced he would represent the accused 17 year old, Kyle Rittenhouse, pro bono. A legal fund is being set up. We will hopefully get a decent legal precedent that says if you attack an armed man with intent to harm and he shoots you, tough shit.

What is different is that this kid looks like any White kid that age in America. He isn't a "domestic terrorist", compare his photo to the photos of black thugs shooting other blacks every day in America. 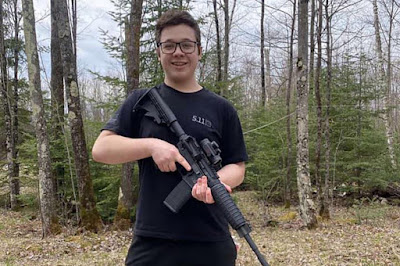 Meanwhile here are some younger photos of the black man shot in Kenosha, Jacob Blake: 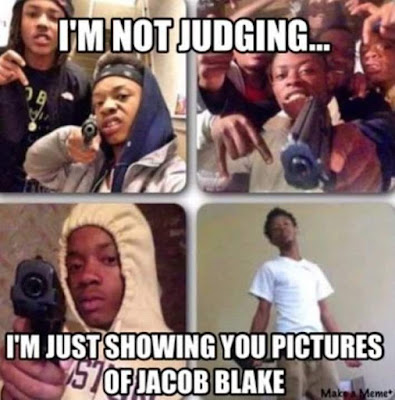 The media and Democrats like Ayanna Pressley and Ilhan Omar would have you believe the top photo is of a dangerous terrorist and the bottom photos are of a wonderful guy.

We know the difference. We know that our sons might soon face the choice of cowering before the mob or the prospect of being locked in prison for defending themselves. A choice many of us might be making soon. The Zman summed it up well today:

This is what makes Kenosha a pivot point in the ruling class revolt. This kid is not a scary monster who can be anathematized by the system. Even vulgarians like David Frum think he looks innocent. Note that Frum is okay giving weapons to these kids when they are killing Muslims on behalf of Israel, but otherwise he never wants to see white people holding firearms. For the typical white person, if he had a son, he would look like Kyle Rittenhouse.

Ultimately, that is now the significance of the Kenosha riots. White people are faced with the reality of their sons being sent to prison for the crime of being white. They face having their businesses destroyed because non-whites are ungrateful. They are being harassed at restaurants and in their home by mobs sponsored by the ruling class who have embraced anti-whiteness as a revolutionary cause. It’s no longer an abstract political argument. It’s daily reality.

That is the world we are in. We don't like it. It doesn't matter. We didn't ask for this, we just wanted to be left alone. They wouldn't. It isn't fair and it isn't just. Crying won't change it.

Our politics must be based in the world as it is, not as we wish it were. That world is one that is increasingly aligned against us. If we wish to see it changed, we will have to make that happen.