Stuff You Can't Make Up

Even as jaded as I am in 2020, stories like this keep startling me.

A 26 year old man named Jeramie Shorter was at a funeral for his son Jermier, an 8 year old boy who died after a five year fight against cancer. The man is burying his 8 year old son but that doesn't stop 24 year old Nuemonei Tre Vonne Laster from going to the funeral and shooting Jeramie Shorter, killing him.

Even if there was someone I felt was in need of killing, the idea of gunning him down at the funeral of his little boy is unimaginable. Apparently Mr. Laster thought this was a good place to shoot him, maybe because his guard would be down. Mr. Laster is also clearly a genius, because as he drove away from the scene of the murder he was spotted because the car he was driving didn't have license plates, something sure to attract the attention of police. He was later caught on foot after trying to throw the gun over a fence. Obviously Mr. Laster is a criminal mastermind.

The story was awful enough there but then as I read a little further, I came across some additional information. Keep in mind that the deceased, Jeramie Shorter, is 26 years old.

Jeremy Shorter was remembered by family and friends with a balloon release Sunday evening.

Jamie Delaney Shorter is Jeremy’s father and he said he will be strong for the 17 children his son left behind.

Doing the math here, assuming that the child he buried was number 18, and also assuming he only was fathering children as an adult which is unlikely, that would work out to 2.25 children fathered (presumably out of wedlock) every year of his adult life. Even if he started to impregnate girls at 16, that is still 1.8 kids per year and that 18 kids figure might be even higher, those are just the kids he knew about or claimed.

The state of the black community is an absolute train-wreck and the further we get from slavery and Jim Crow and all of the other excuses put forth, the worse it gets. It bears repeating that one of the surest guarantees of a life of poverty is having a child out of wedlock but here is Mr. Shorter spreading his genetic material all over Iowa. No word as to how many mothers are represented by the 18 children he fathered but it is safe to assume at least half a dozen and probably more.

For all of the endless yammering about "black lives matter", the truth is that the Marxist organizers behind bLM are openly seeking to destroy the traditional family and replace it with the state. Since many of the top voices in bLM are Marxists, homosexuals or both, this makes sense.

What the black community desperately needs is not "police reform", it is strong, intact black families. Without that we will end up with even higher rates of out of wedlock births, more poverty and even more violent crime. The very same movement that claims to care about "black lives" is actively seeking to undermine the one thing that could help stop the bloodshed in the black community.

Trying to preserve black lives while supporting an anti-family organization is like trying to extinguish a fire by spraying it with gasoline but pointing that out apparently makes me racist. 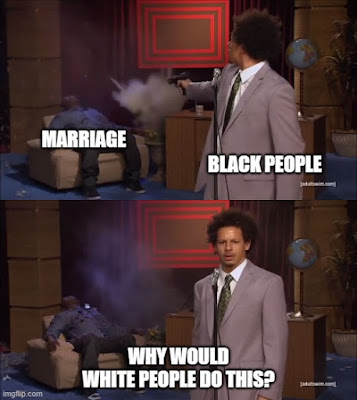